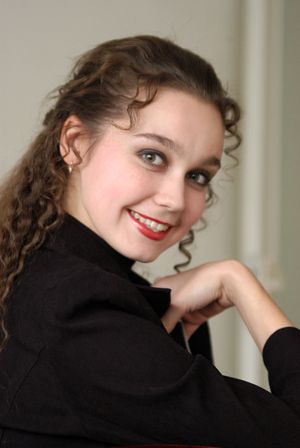 Graduated from the Rostov State Rakhmaninov Conservatoire (Academy) in 2005, class of Professor Khudoverdova.

Soloist with the Rostov State Music Theatre from 2003-2005 where she performed as Nastya (The Gypsy), Frasquita (Carmen), Rosalinde (Die Fledermaus) and Sylva (Die Czardasfürstin). Toured with the company to the UK and Ireland.

In March 2006 at the Warsaw Opera she made her debut as Musetta in Puccini´s La bohème (directed by Mariusz Treliński and conducted by Kazimier Kord).

Made her debut as Masha in the Mariinsky Theatre´s production of Moscow, Cheryomushki at the St Petersburg Operetta Theatre as part of the XIV International Stars of the White Nights Festival of Arts in summer 2006. She performed the same role in summer in London the same year.

Made her debut as Musetta in La bohéme at the Mariinsky Theatre in September 2006.

Has performed together with Larisa Gergieva at Academy concerts in Moscow and London.