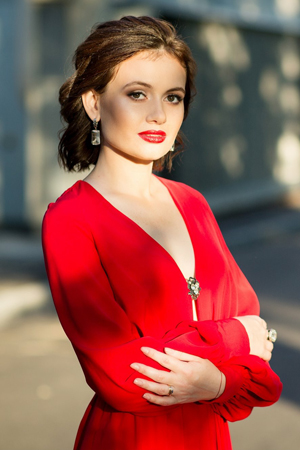 Tsvetana Omeltchuk was born in Yuzhno-Sakhalinsk. From 2005 to 2007 she was a violinist with the Yuzhno-Sakhalinsk Chamber Orchestra. From 2013 to 2015 Tsvetana studied at the Gnesin Musical College (class of Aida Gainanova). In 2017 she received her master’s degree at the Gnesin Russian Academy of Music (class of Elena Zelenskaya, People’s Artist of Russia).

From 2015 to 2018 Tsvetana was a soloist of the Astrakhan State Theatre of Opera and Ballet, where she performed the roles of Olga (Eugene Onegin), Polina (The Queen of Spades), Laura (Iolanta), Flora Bervoix (La traviata), a Young Boy (The Legend of the Invisible City of Kitezh and the Maiden Fevroniya), Marina Mnishek (Boris Godunov), Konchakovna (Prince Igor), Lyubasha and Dunyasha (The Tsar’s Bride).

Since 2016 she has been a soloist of the Mariinsky Academy of Young Opera Singers.

Takes part in Mariinsky Theatre productions for children (White Fairy and Red Fairy in Adalmina’s Pearl, the Queen in Snow White, the House-Spirit in Soldier’s Tales, Musya in Murych the Cat, Nopperapon in The Adventures of Kintaro, the Little Aspen-Tree in The Turnip) and concerts.

Appears at the Grand and Small halls of the St Petersburg Philharmonia.