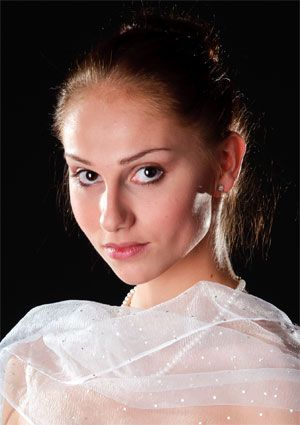 She has a naturally pliant torso, supple arms and exceptionally pointed feet, and she used her elegant carriage with fresh spirit. She danced with unmannered lyricism and illuminated Tchaikovsky's score with ravishing, languid phrasing. She played the evil temptress Odile without jarring sauciness. She painted a rhythmic portrait through staccato gestures.

The young dancer’s technique is pleasing for its pure lines, the clarity of the phrasing, the beautifully nuanced arabesques of her variations, her dynamism-filled tours around the stage and her flawless fouettés.

The artiste captivates with the precision of her poses, the softness and that somehow special cantilena in the lines of her neck, shoulders and arms. In the duets with Conrad, Skorik achieves a deep synthesis of music and choreography, turning the dance into visible music.

Born in Kharkov (Ukraine).
Graduated from the Perm School of Dance in 2007.
Joined the Mariinsky Ballet the same year.
Principal since 2015.