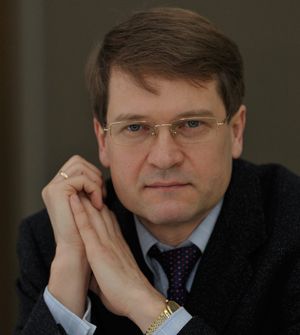 Graduated from the Leningrad Conservatory as a chorus master in 1985 and as an opera and symphony conductor in 1991 studying under Prof. Viktor Fedotov.

Since 1990 he has been Musical Director of the Vaganova Academy of Russian Ballet. He collaborated with many orchestras in Russia and abroad including St. Petersburg Symphony Orchestra, Russian National Orchestra, philharmonic orchestras of Rochester, Mexico City, Shanghai, Seoul, Tokyo and other ensembles.

In 1997 he debuted as a guest conductor at the Covent Garden with La Bayadère. Since then he regularly performs in London conducting Royal Ballet productions, tours and Russian Ballet Icons Galas at the London Coliseum. His recordings of La Bayadère, Swan Lake and The Sleeping Beauty with the Royal Ballet and Covent Garden Orchestra were released on DVD (2008–2009).

His repertoire at the Mariinsky includes Giselle, Swan Lake, The Sleeping Beauty, The Nutcracker, La Sylphide, La Bayadère, Le Corsaire, Don Quixote, Le Sacre du printemps, The Fountain of Bakhchisarai, Romeo and Juliet, Cinderella, Jewels, The Moor’s Pavane and other ballets. Under his direction are also played the graduation performances of the Vaganova Academy and the galas of the international ballet festivals.