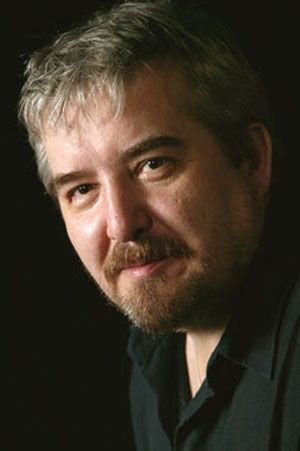 Production Designer
Born in Rybinsk, Yaroslavl Region. In  1980 he graduated from the Serov Arts School in Leningrad. The same year, he joined the production faculty (course of M. Smirnov) at the Leningrad Cherkasov State Institute of Theatre, Music and Cinema (LGITMIK, now the St Petersburg State Academy of Theatre Art). After graduating from the institute, he worked at the State A.K. Tolstoy Drama Theatre (Order of the Red Banner of Labour) in Bryansk, where he designed productions of Female Constancy after the play The Constant Wife by William Somerset Maugham and Alexander Stein’s The Ocean. From 1987-90 he was Principal Designer of the Tyumen Drama Theatre, where he designed productions of Nikolai Erdman’s The  Suicide, Jean-Baptiste Molière’s Don Juan, Junji Kinoshita’s Twilight Crane (after a Japanese folk tale) and Alexander Galin’s Stars in the Morning Sky among other works. He subsequently worked in theatres in St Petersburg. Productions he has designed include Ostrovsky’s Talents and Admirers at the St Petersburg State Academic Lensoviet Theatre and A  Christmas Tale with Ghosts after Charles Dickens’ Christmas Stories at the State Drama Theatre on Liteiny among others. As an assistant production designer, he has worked at the Mariinsky Theatre on revivals of the ballets The  Sleeping Beauty by Pyotr Tchaikovsky (1999) and La Bayadère by Ludwig Minkus (2002), both staged by choreographer Sergei Vikharev. He was the designer of the revived sets for a production of Igor Stravinsky’s Les Noces (choreography by Bronislava Nijinska, revived by Howard Sayette, 2003). He was involved in a production of the ballet La Valse by George Balanchine to music by Maurice Ravel (revival of the sets; George Balanchine’s choreography revived by John Clifford, 2004).

He has been involved in productions of the operas Semyon Kotko by Sergei Prokofiev (1999), Otello by Giuseppe Verdi (2001) and The  Legend of the Invisible City of Kitezh and the Maiden Fevronia by Nikolai Rimsky-Korsakov (2001).

As a production designer he has worked in the Czech Republic (Adolphe Adam’s Le Corsaire) and Bosnia (Tchaikovsky’s Swan Lake).