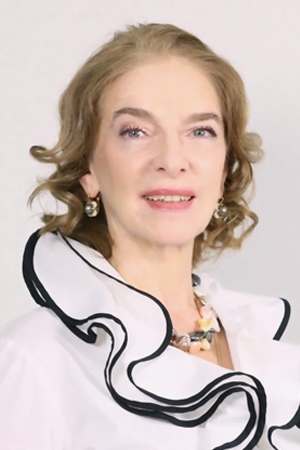 Pianist Irina Soboleva’s credo that “a concertmaster is not just an accompanist but a creative partner on a par with the soloist” emerged during her studies at the Rimsky-Korsakov Leningrad State Conservatory (from which she graduated with distinction) and when associating with the wonderful musicians and teachers Dmitry Svetozarov and Yevgeny Shenderovich.

In 1980, three years after graduating from the conservatory, Irina Soboleva was invited to join the Mariinsky Theatre as an opera concert mistress.

In 1986 she received a diploma at the International Tchaikovsky Competition. Over the years at the theatre, Irina Soboleva’s repertoire has become truly vast. Productions she has worked on include The Queen of Spades, Eugene Onegin, Sadko, Ruslan and Lyudmila, Prince Igor, Mazepa, The Enchantress, The Tsar’s Bride, The Snow Maiden, Boris Godunov, War and Peace, The Love for Three Oranges, Semyon Kotko, Katerina Ismailova, The Nose, Carmen, Macbeth, Un ballo in maschera, Adriana Lecouvreur, Król Roger, The Makropulos Affair, The Turn of the Screw, Aida and A Midsummer Night’s Dream among others. In close collaboration with the composer Rodion Shchedrin she worked on the world premieres of his operas The Lefthander (2013) and A Christmas Tale (2015) and the St Petersburg premiere of the opera Lolita (2020).

Has taken part in productions of I vespri siciliani, War and Peace (co-production with the Harbin Grand Theatre) and Macbeth at the Primorsky Stage of the Mariinsky Theatre.

The pianist frequently performs in concert, appearing with Mariinsky Theatre soloists at the Grand and Small halls of the St Petersburg Philharmonia and touring to many countries throughout the world.

On several occasions Irina Soboleva has performed with the Mariinsky Opera in Germany, Italy, Portugal, France, Japan, Israel and the USA among other nations; she has been involved in the Stars of the White Nights festival in St Petersburg, the Moscow Easter Festival, the Mikkeli Festival and the Gergiev Festival in Rotterdam.

Irina Soboleva has taken part in audio recordings of several chamber music programmes as well as the operas Boris Godunov, Mazepa, Semyon Kotko, Prince Igor, War and Peace, The Love for Three Oranges, The Nose, Eugene Onegin, Iolanta and a Bolshoi Theatre of Russia production of The Maid of Pskov staged at the Pskov Kremlin. On numerous occasions she has been invited to Welsh Opera for productions of Russian operas, as well as to the Théâtre du Châtelet and the Opéra Bastille in Paris and the Teatro Lirico di Cagliari in Sardinia. Has taken part in productions of the operas The Nose at the Finnish National Opera and The Queen of Spades at the Theater Chemnitz (Germany). At the invitation of the Finnish National Opera and the Korea National Opera she worked on rehearsals of the operas Eugene Onegin, Lady Macbeth of Mtsensk and Boris Godunov.

The pianist is also engaged in teaching: since 2012 she has taught at the Rimsky-Korsakov St Petersburg State Conservatory, Department of Concert Mastership; she is a jury member for several international competitions and runs masterclasses in Russia and abroad.