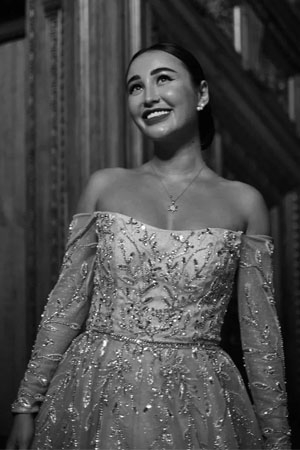 Diana Kazanlieva was born in Cherkessk (Karachay-Cherkessia). She graduated from the Zhirkov Yakutsk College of Music (class of Yelena Yakovleva) in 2010 and from the Rimsky-Korsakov St Petersburg State Conservatory (class of Galina Kiseleva) in 2017. Has taken part in masterclasses conducted by Harry Peeters, Susan Bullock and Elena Obraztsova.

From 2019 to 2021 Diana Kazanlieva worked at the St Petersburg Chamber Opera, where she performed the roles of Zerlina (Don Giovanni), Tatiana (Eugene Onegin), Adalgisa (Norma), First and Second maids (Elektra).

In 2021 she became a fellow of the Atkins Young Artists Program at the Mariinsky Theatre. In 2022 she made her debut at the theatre, appearing in a concert by young opera soloists and subsequently performing the part of Tatiana in Eugene Onegin (chamber version).
Information for June 2022