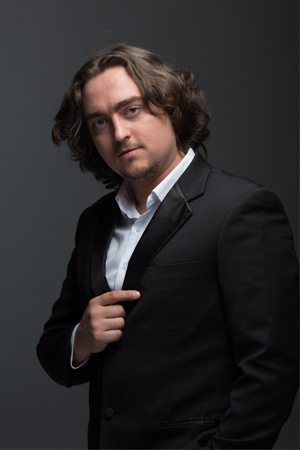 Artem Krutko was born in 1985 in Slavyansk-na-Kubani (Krasnodar Krai (Krasnodar Region)). Studied classical singing at the Chelyabinsk State Academy of Culture and Arts under Professor Lyudmila Borovik, graduating in 2007. In 2011 he trained at the Opéra de Lyon under the renowned French tenor Jean-Paul Fouchécourt. He launched his career at the Glinka Chelyabinsk State Academic Opera and Ballet Theatre, where he appeared from 2004 to 2013 and where he has continued to work since 2019.

From 2013 to 2015 he was a soloist with the Theater und Orchester Heidelberg, and from 2015 to 2019 he was a soloist at the Kolobov Novaya Opera Theatre of Moscow. Has appeared at the Oper Bonn, the Schlosstheater Schwetzingen, the Badisches Staatstheater Karlsruhe, the Opéra royal du Château de Versailles, the Mikhailovsky Theatre and the Moscow State Stanislavsky and Nemirovich-Danchenko Music Theatre among other venues. Has performed recitals in towns and cities throughout Russia as well as in Germany, Austria, Switzerland, the Netherlands and Belarus.

Has performed solo alto cantatas by Vivaldi and Bach, the alto parts in Handel’s oratorio The Messiah, Pergolesi’s Stabat Mater and Mozart’s Requiem and the tenor part in Bach’s Kaffeekantate.

In 2008 he received the State Prize of the Chelyabinsk Region, and in 2009 he was awarded the Golden Lyre prize (Chelyabinsk).
Information for February 2022