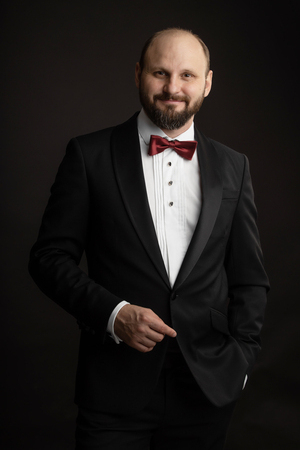 Pavel Yankovsky was born in the town of Byaroza (Belarus) in 1979. In 2006 he graduated from the Rimsky-Korsakov St Petersburg State Conservatory (class of Nikolay Alexeev). From 2004 to 2008 Yankovsky was a soloist with the Opera and Ballet Theatre of the St Petersburg Conservatory. At the same time he was a trainee of the Mariinsky Academy of Young Opera Singers (2005–2008).

He honed his singing skills at masterclasses of Elena Obraztsova, Vladimir Atlantov and Mati Palm (2006, 2007), organised by the International Summer Academy in Mikkeli. Yankovsky has also taken part in masterclasses by Neil Shicoff, Paolo De Napoli and Stefano Gibellato.

From 2010 to 2019 he was a soloist with the Novosibirsk State Academic Opera and Ballet Theatre, where he appeared in more than twenty lead roles. He received the Paradise Award for Best Opera Singer, presented by the Novosibirsk Branch of the Union of Theatre Workers of the Russian Federation (for his Robert in Iolanta in 2011 and for Valentin in Faust in 2012).

Yankovsky made his debut at the Mariinsky Theatre in 2005, performing the role of Prince Yamadori in the opera Madama Butterfly; since 2017 he has regularly appeared at the theatre as a guest soloist.

During a tour of the Mariinsky Theatre with Valery Gergiev he sang in Il viaggio a Reims (Washington’s Kennedy Center, Teatro Real in Madrid) and The Love for Three Oranges (Teatro Real, Tokyo Bunka Kaikan).

As a guest soloist, Yankovsky has appeared at the Perm and Krasnoyarsk opera and ballet theatres, the Opernhaus Wuppertal, the Staatsoper Hannover, the Vlaamse Opera (Flemish Opera; Ghent and Antwerp), the Theater Basel, the Luzerner Theater, the Lithuanian National Opera and Ballet Theatre and the Bolshoi Theatre of Belarus. In 2013 and 2015 he took part in the Opera på Skäret festival (Sweden). He gave a number of recitals in the USA, Great Britain and Denmark.
Information for December 2022