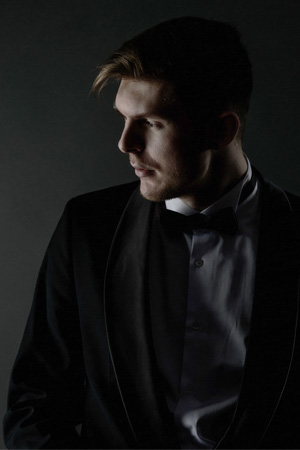 Efim Zavalny was born in Syktyvkar in 1987. In 2008 he graduated from the College of Arts of the Komi Republic (Syktyvkar), specialising in academic singing (class of Marat Kozlov). In 2007 Zavalny won the Silver Medal in academic singing at the Youth Delphic Games of Russia (Yaroslavl Region). From 2010 to 2013 he was a soloist with the Komi Republic State Opera and Ballet Theatre (Syktyvkar), where he performed the title role in Eugene Onegin, as well as the roles of Mizgir (The Snow Maiden), Prince Orlofsky (Die Fledermaus), Alcindoro and Benoît (La Bohème) among others.

In 2016 Efim Zavalny obtained master’s degree at the Herzen State Pedagogical University of Russia (St Petersburg; class of Vladimir Vaneyev). The following year he graduated from the Elena Obraztsova International Academy of Music (St Petersburg), where he once again studied with Vaneyev.

Zavalny performed at the academy’s concerts in the Small and Grand halls of the St Petersburg Philharmonia. He has portrayed Eugene Onegin and Don Giovanni in the academy’s productions at the Elena Arts International Festival in St Petersburg. In 2018 the singer appeared as Grigory Gryaznoy (The Tsar’s Bride) and the Demon in Rubinstein’s eponymous opera at the Richard B. Fisher Center for the Performing Arts (Bard College, New York State).

Efim Zavalny made his debut at the Mariinsky Theatre as Cesare Angelotti in Tosca in 2016.