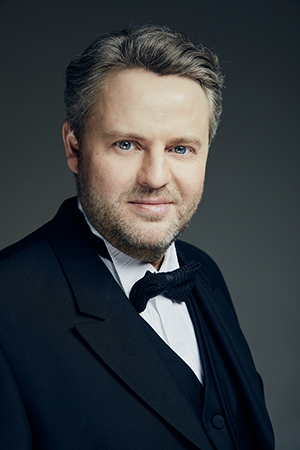 The ease with which tenor Sergei Semishkur sang the role of Énée is something not every great performer can achieve.
Nezavisimaya gazeta

Tenor Sergei Semishkur, too, was impressive as Vakula the smith. A stately and well-proportioned fellow, he also looked good and delighted us with his voice: beautiful, and filled with true emotion.
Kultura

Sergei Semishkur was born in Kirov. Graduated from the Nizhny-Novgorod State Glinka Conservatoire in 2003 (faculties of choral conducting and academic vocals).The same year he joined the Mariinsky Academy of Young Singers. Since 2007 he has been a soloist with the Mariinsky Opera Company.

Sergei Semishkur has taken part in various opera festivals around the world including festivals in Savonlinna and Mikkeli (Finland), the Salzburg Festival (Austria), the Edinburgh Festival (Scotland) and the Red Sea Festival in Eilat (Israel).
The singer frequently performs on tour, appearing at the world’s most prestigious concert venues, among them Carnegie Hall in New York, the Kennedy Center in Washington, the Millennium Centre in Cardiff, the Barbican Hall in London, the Royal Opera House in Stockholm, the Opéra Bastille in Paris, the Teatro Real in Madrid and the Deutsche Oper in Berlin.

In 2010 Sergei Semishkur performed in a recording of the opera The Nose by the Mariinsky Theatre which received a Grammy nomination.
In 2013 he performed the role of Vladimir Igorevich (Prince Igor) at the Metropolitan Opera. In 2015 he sang the roles of the Young Gypsy (Aleko) and Paolo (Francesca da Rimini) at the Théâtre La Monnaie in Brussels.

The singer’s discography includes recordings of the operas Oedipus Rex (Oedipus Rex), The Nose (the Nose) and Das Rheingold (Froh) as well as Berlioz’ Requiem and Mahler’s Eighth Symphony, which was recorded together with the London Symphony Orchestra.