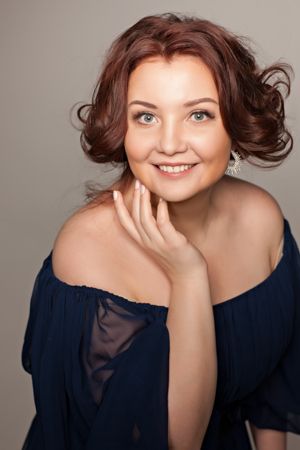 Albina Shagimuratova was born in Tashkent. Graduated from the Kazan Music College named after I.V. Auhadeev as a choral conductor and entered the Zhiganov Kazan State Conservatoire. From her third year she transferred to the Tchaikovsky Moscow State Conservatory, class of Professor Galina Pisarenko. Graduated from the conservatory with distinction and undertook an assistant traineeship. Honorary graduate of the youth opera programme of Houston Grand Opera (USA), where she studied from 2006 to 2008. Over the years she has taken lessons from Dmitry Vdovin in Moscow and Renata Scotto in New York. Whilst a student in Moscow, Albina Shagimuratova was a soloist at the Stanislavsky and Nemirovich-Danchenko Moscow Music Theatre where she performed the roles of the Swan-Princess in The Tale of Tsar Saltan and the Queen of Shemakha in The Golden Cockerel by Rimsky-Korsakov.

International acclaim came to the singer in 2007, when she won 1st prize and the Gold Medal at the International Tchaikovsky Competition. One year later came the singer’s debut at the Salzburg Festival as the Queen of the Night in Die Zauberflöte with the Wiener Philharmoniker under Riccardo Muti. She subsequently appeared in that role at the Metropolitan Opera, the Royal Opera House (Covent Garden), the Teatro alla Scala, the Vienna State Opera, the Bayerische Staatsoper, the Deutsche Oper Berlin, San Francisco Opera and the Bolshoi Theatre of Russia among other theatres.

As a guest soloist she has appeared at the Glyndebourne Festival, the Edinburgh International Festival, the BBC Proms and at major opera houses and concert halls in Europe and America.
In 2011 she performed the role of Lyudmila in Dmitri Tcherniakov’s production of Ruslan and Lyudmila, with which the historic Bolshoi Theatre of Russia reopened following reconstruction (the production was recorded on DVD).

Albina Shagimuratova made her debut at the Mariinsky Theatre in 2015 in a concert performance of Lucia di Lammermoor. In the 2018–19 season she joined the theatre’s opera company.

Has sung in the premiere of a new Mariinsky Theatre production of Lucia di Lammermoor (2018). Has taken part in performances on tour with the company at the International Mariinsky Far East Festival (Vladivostok) and the Moscow Easter Festival.