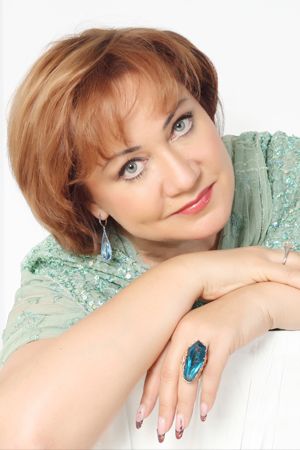 Borodina sang brilliantly, and together with Gergiev’s equally melodious and gentle orchestra she formed a magnificent duet. Borodina performed naturally, in her own manner… the image emerged from her sense of confidence, her irresistible nature and her sense of power...
Kultura (“Culture”)

Saint-Saëns’ heroine requires special qualities of timbre and the ability to change the ‘temperature’ of the singing in an instant – from passionate heat to icy cunning. Borodina has all of this, the nobleness and purity of her voice sometimes making those who listen to her Dalila to lose themselves. She is very good indeed – even too good for such a terrible character.
Politburo (“Political Bureau”)

They listened to her magical mezzo-soprano voice as if enchanted. This magnificent voice sounded even, intense and true.
Sankt-Peterburgskiye vedomosti (“St Petersburg News”)

Having initially created the image of the cruel and imperious elderly Russian countess wrapped in furs, Borodina performed her heartfelt couplet pianissimo and with inner tension, finding lower notes for it that were bewitching with full-sounding colour.
Die Presse, 23 January 2022

Olga Borodina, the grande dame of Russian opera, reveals a subtle and melancholy quality of poetry in the song from Grétry’s Richard Cœur-de-lion.
Kronen Zeitung, 23 January 2022

Olga Borodina was born and grew up in Leningrad. In 1989 she graduated from the Rimsky-Korsakov Leningrad State Conservatory. At a music school she studied under Valentina Gagen, and at the conservatoire she was a student of Irina Bogacheva.

At the Kirov (Mariinsky) Theatre Olga Borodina made her debut as Siébel in Gounod’s Faust (1988). However, the singer’s “calling card” was to be the role of the schismatic Marfa in Musorgsky’s Khovanshchina, with which she, as a young opera soloist, was entrusted in 1989 in a revived production by Leonid Baratov as part of a festival commemorating the composer. In that role she later appeared on Mariinsky Opera tours (Edinburgh and Salzburg festivals and Covent Garden) as well as in productions by other theatres including the Staatsoper Hamburg (1994, directed by Harry Kupfer) and the Metropolitan Opera (2012, directed by August Everding). The singer’s repertoire also includes Musorgsky’s operas Boris Godunov and Salammbô. In 1991 in Mérida (Spain) she sang in the premiere of a production of Salammbô revised by Vyacheslav Nagovitsin, and the same year she received her first engagement at the Opéra national de Paris, making her debut as Marina Mnishek. Borodina has given several performances of Musorgsky’s cycle Songs and Dances of Death.

TV broadcasts of the operas Khovanshchina, Boris Godunov (production by Andrei Tarkovsky) and War and Peace (production by Graham Vick, 1991) from the Kirov Theatre as well as audio recordings produced by Philips provided powerful impetus to the singer’s career and brought her world renown. From the early 1990s Olga Borodina has worked a great deal in the west. She appears at the most prestigious opera and concert venues; in 1992 she made her debut at Covent Garden, appearing as Dalila in Saint-Saëns’ opera Samson et Dalila, in 1993 she made a concert debut at the Teatro alla Scala, in 1995 she appeared at San Francisco Opera (La Cenerentola), in 1997 she sang at the Metropolitan Opera and at the Salzburg Festival (Boris Godunov), in 2013 she made her debut at the Vienna State Opera (Aida). Her rare type of voice, a coloratura mezzo-soprano, has been praised in productions of operas including Rossini’s La Cenerentola (Covent Garden, San Francisco Opera) and L’italiana in Algeri (Metropolitan Opera, San Francisco Opera). Working outside Russia, the singer perfected her performing technique, studying under some of the most outstanding vocalists. Her repertoire expanded to include roles in Bizet’s Carmen, Cilea’s Adriana Lecouvreur and Ponchielli’s La Gioconda.

A recording of Verdi’s Requiem, made with Borodina and the Chicago Symphony Orchestra under Riccardo Muti, received two GRAMMY awards (2010).

In 2013 the singer gave a jubilee concert at the State Kremlin Palace in Moscow.
In 2015 Olga Borodina featured on the jury of the XV International Tchaikovsky Competition (Moscow – St Petersburg).

In 2022 she performed the role of the Countess in The Queen of Spades conducted by Valery Gergiev at the Vienna State Opera.