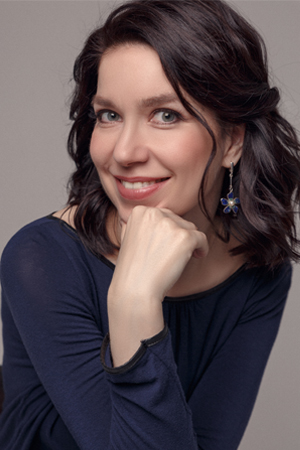 On Tuesday Ekaterina Goncharova sang Mr Shchedrin’s mini-monodrama Cleopatra and the Snake, and sold it beautifully. There is a lot of keening and moaning over shifting orchestral textures as Cleopatra faces death, but Ms Goncharova never made an ugly sound. Her swells and retreats on long-held high notes were remarkable, and her few moments of pure, untortured singing were lovely. As wide-ranging as it is concise, this work should have a big future with those flexible, adventurous sopranos who possess a fine sense of drama.
James R. Oestreich. The New York Times. 31 October 2012

Tatiana (Ekaterina Goncharova, also from the Mariinsky) is a dark-haired beauty in pale blue. <…> This young singer revealed so much in Tatiana: from passion to shrewishness, from delight to burning shame at the letter she has sent to Onegin, from arrogance to a mournfully rejected love – a love to which she nevertheless admits. <…> There is so much veracity and honesty in both this singer’s acting and her vocal skills.
Elena Cheremnykh. Business Online. 12 May 2015

Born in Novokuznetsk (Kemerovo Oblast). Graduated with distinction from the vocals faculty of the Rimsky-Korsakov St Petersburg State Conservatory (class of Galina Kiseleva).

From 2009 to 2012 she was a soloist with the St Petersburg Conservatory Opera and Ballet Theatre.

At the outset of her career, the singer's appearances in a concert performance of the opera Carmen as Micaëla under Mariss Jansons (2008) and her debut at the Kölner Philharmonie in a concert with Montserrat Caballé (2010) were to prove ground-breaking.

In 2011 she made her Mariinsky Theatre debut as Micaëla (Carmen) and then joined the Mariinsky Opera Company.

She sang the main women's parts at the Mariinsky premieres of Faust, Othello, Eugene Onegin (directed by A. Stepanyuk), War and Peace (directed by G. Vic) and The Oprichnik.

In 2012 she performed Rodion Shchedrin's Cleopatra and the Snake, a dramatic scene for woman's voice and orchestra, at the work's premiere in the USA (Memorial Hall of the University of North Carolina, Chapel Hill) and in Russia (Concert Hall of the Mariinsky Theatre). Took part in the world premiere of Rodion Shchedrin's opera The Lefthander (2013) and the first Mariinsky Theatre performance of the choral opera Boyarina Morozova (2014).

In March 2013 she took part in the gala Music of the White Nights at the Teatro Colón in Buenos-Aires (conducted by Valery Gergiev). In the summer of 2016 she appeared as Desdemona (Otello) at the Savonlinna Opera Festival (Finland). In May 2018 she performed the roles of Zemfira and Francesca in Rachmaninoff's operas Aleko and Francesca da Rimini at the Theatre Royal in Glasgow (Scottish Opera productions). Took part in a series of performances by the Vilnius City Opera, appearing as Marguerite in the opera Faust (2017–2018).

In November 2019 she performed the soprano part in Rachmaninoff’s poem The Bells at the Konzerthaus in Vienna, the Philharmonie de Luxembourg and the Elbphilharmonie in Hamburg (with conductor Dmitry Liss).