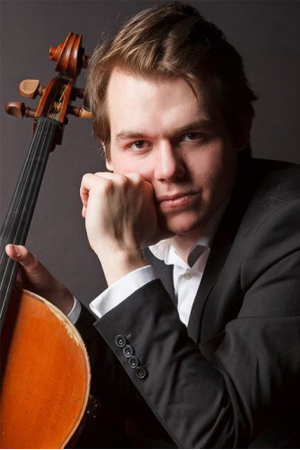 Vasily Stepanov was born in 1994 in Kazan. In 2018 he graduated from the Tchaikovsky Moscow State Conservatory (classes of Natalia Shakhovskaya and Boris Andrianov), subsequently completing a trainee-assistantship at the conservatory (class of Boris Andrianov). From 2018 to 2020 he trained at the Escuela Superior de Música Reina Sofía in Madrid (class of Jens Peter Maintz).

Grant recipient of the Ministry of Culture of the Republic of Tatarstan. Has taken part in masterclasses conducted by Sergei Roldugin, David Geringas, Gautier Capuçon, Martti Rousi, Niels Ulner and Torleif Thedéen in addition to attending the Carl Nielsen Masterclass (Assens, Denmark).

Since 2017 he has been collaborating with stage director Dmitry Krymov. Took part in the recording of Kuzma Bodrov’s music for the films Sobibor by Konstantin Khabensky (2018), Brotherhood (Leaving Afghanistan) by Pavel Lungin (2019), Once Upon a Time in the Desert by Andrey Kravchuk (2022).

In May 2022 Vasily Stepanov played at the St Petersburg premiere of Alexander Tchaikovsky’s dramatic symphony The Song of Igor’s Campaign at the Mariinsky Theatre.

Participant in programmes of the St Petersburg Music House since 2012.
Currently teaches at the Gnesin Russian Academy of Music and the Gnessin Moscow Special School of Music.
Information for December 2022