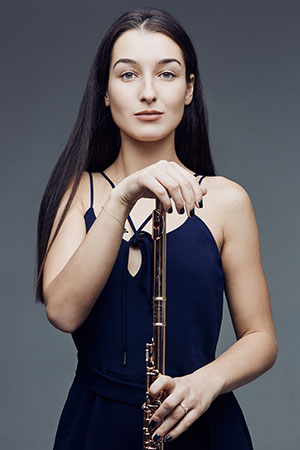 Diploma-winner of the Rotari Competition in Moscow (2011), she also received Grand Prix of the 21th Century Art competition in Kiev (2012) and became a laureate of the International Tchaikovsky Competition (2019).

Has taken part in summer academies run by Felix Renggli, Andreas Blau, Stefán Höskuldsson, Andrea Lieberknecht, Kersten McCall, Visens Prats, François Laurent and William Bennett. In 2009, as a prize-winner at the Musical Olympus festival, she appeared at Carnegie Hall in New York and as a laureate of the Gartow Fund in Germany and Switzerland. Since 2011 she has participated in the programme A River of Talents run by the St Petersburg House of Music. As a soloist and in chamber ensemble she performed on Flute Virtuosi festival (St Petersburg, 2016–2019) and Kissinger Sommer festival (Bad-Kissingen, 2017).

Since 2013 she has been Principal Flute of the Mariinsky Orchestra.