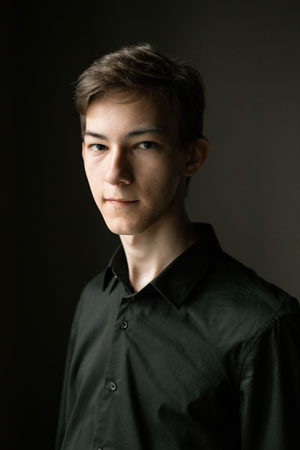 Ravil Islyamov was born in Vladimir in 2001. Graduated from the Central Music School of the Tchaikovsky Moscow State Conservatory (class of Alexander Vinnitsky), currently studies at the Moscow Conservatory in the class of the same teacher.

Recipient of the Gold Medal at the Youth Delphic Games of Russia (Tyumen, 2016; Vladivostok, 2018) and the Grand Prix at the International Beethoven Competition for Violin, Viola and Cello (Sankt Pölten, Austria, 2016), winner of the Youth Delphic Games of the CIS Member States (Moscow, 2016) and the All-Russian Music Competition (Moscow, 2018). Was named “Best Participant of the Second Round” at the XVI Tchaikovsky International Competition (Moscow – St Petersburg, 2019).

Has taken part in masterclasses conducted by Alexander Vinnitsky and Boris Kuschnir.

Participant in programmes of the St Petersburg Music House since 2017.
Currently plays a Giuseppe Guarneri “del Gesù” violin of 1735.
Information for May 2022