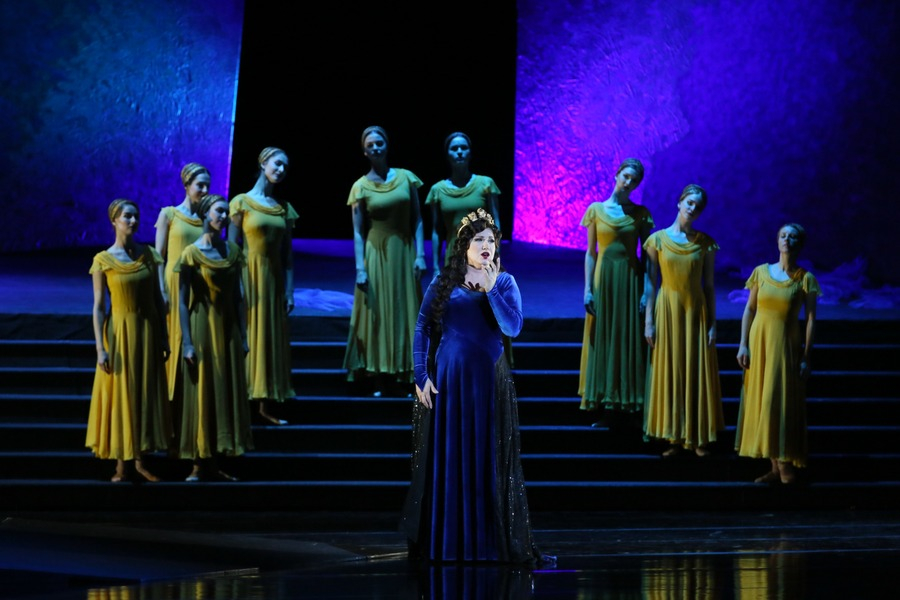 Act I
A square in the Palestinian city of Gaza, about 1150 years BC. The temple of Dagon, the supreme god of the Philistines, can be seen on the left.
The Jews are gathered in the square. They pray to God: for a long time now they have been enslaved by the Philistines.
Samson calls his tribesmen to revolt. The Jews seem doubtful about the success of the resistance but Samson persuades them with his passionate appeal. The unrest is noticed by Gaza ruler, Satrap Abimelech. He angers the Jews with his mocking speech. In a rage, Samson kills Abimelech and his men flee in panic. The High Priest of Dagon turns up, alarmed by the noise. Seeing the dead Satrap, he urges his fellow citizens to revenge, but they escape, terrified by the revolt. A group of the Jewish elders are going to pray to thank God for the victory. The priestess Delilah accompanied by girls comes out of the temple. Admiring Samson’ courage, she sings him a seductive aria about spring. One of the elders tries to warn the hero, but in vain: he has been enchanted by the beautiful Philistine.

Act II
Valley of Sorek in Palestine. Night.
Delilah waits for Samson, but her thoughts are full of no love but revenge. The High Priest appears. The Jews, led by Samson, are winning new victories, so the priest promises Delilah anything she wants for betraying the hero in his hands. But Delilah needs no reward: her hatred for Samson is great enough.
A thunderstorm is coming. The embarrassed Samson turns up. Assuring him of her love and begging to be frank with her, Delilah, by deceit and tenderness, worms out the secret of his invincible strength. The secret lies in Samson’s hair. The Philistine entices the hero into her bed and, while he sleeps, cuts off his hair. Then she calls the warriors who burst into the house to capture Samson.

Act III
Scene one. A prison in Gaza.
Samson, blinded and powerless, prays to God to take his life, but not to punish his countrymen who are suffering again under the hard oppression of the foreigners.
Scene Two. Temple of Dagon.
The Philistines celebrate their victory. The blind Samson is brought in. The High Priest mockingly welcomes the defeated hero. Delilah reminds Samson of the moments of bliss, when, embraced by her, he forgot about his duty. At the end of the ceremony, Samson has to kneel down before the statue of Dagon. In anger and despair, the hero cries out to God begging to return his power. Feeling that his prayer has been heard, he asks the guide boy to bring him closer to the columns. Pushing them, Samson destroys the temple and perishes under the rubble, along with his enemies.


Premiere: 2 December 1877, Großherzogliches Theater, Weimar
Premiere at the Mariinsky Theatre: 19 November 1896 (performed in Russian, translated by Alexandra Gorchakova)
Premiere of this production: 25 May 2016

Running time: 2 hours 50 minutes
The performance has one interval