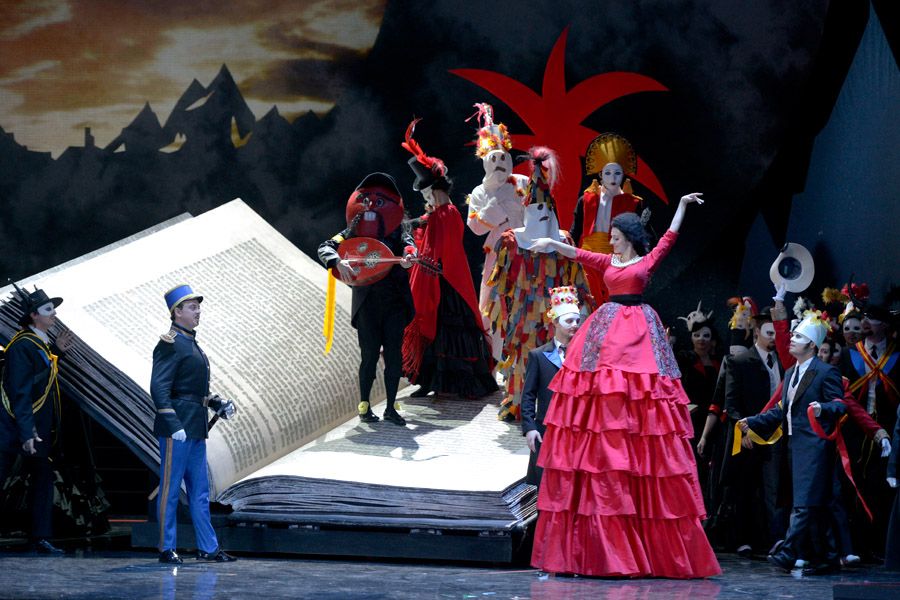 Act I
On a square in a small town in Spain, the people are merrymaking and dancing. Visitors at the tavern praise the Beautiful Dulcinée while four admirers – Pedro, Garcias, Rodriguez and Juan – gather beneath her balcony. However, the Beautiful Dulcinée, despite the general adoration, feels some strange dissatisfaction – she longs to meet a true knight.
Laughter and merry voices can be heard – it is the crowd greeting Don Quichotte and Sancho Pança. Juan makes fun of the knight’s rueful countenance and his veneration for the Beautiful Dulcinée. Rodriguez is enchanted by the beauty of soul and the bravery with which the former protects widows and orphans. Don Quichotte is unruffled. The knight orders his armour-bearer Sancho Pança to give money to the poor and the crippled. The crowd disperses. Sancho heads for the tavern. Night falls.
The admiring knight sings Dulcinée a serenade. Jealous, Juan interrupts him and challenges him to a duel. Dulcinée appears and prevents the fight taking place. Don Quichotte declares to Dulcinée that henceforth he will serve her. She, laughing, asks him for proof of his devotion and to reclaim a necklace stolen from her by bandits. Don Quichotte sets out without delay.

Act II
The morning dawn sees Don Quichotte and Sancho on their way. In the morning mist some windmills can barely be made out. Don Quichotte selects rhythms for a song in honour of Dulcinée. Sancho is not pleased with this extravagant campaign, certain that the beautiful woman was laughing at them. Filled with hatred of his master, Sancho bursts into a furious tirade directed against every woman on Earth. The mist dispels and Don Quichotte takes the windmills to be giants trying to stop him. To Sancho’s terror, he starts battling against them.

Act III
Don Quichotte pursues the bandits. When he stops to rest – standing up in his armour as befitting a knight – the bandits appear. Don Quichotte makes Sancho stand back and makes war with the bandits but is defeated and tied up. The bandits laugh at him and are ready to hang him. But Don Quichotte’s ‘‘deathbed’’ prayer and his eloquent story of the mission of a travelling knight are so touching that the stony hearts of the inveterate bandits soften, and their leader not only frees Don Quichotte but also returns Dulcinée’s necklace. Don Quichotte blesses the bandits and sets off for home, victorious.

Act IV
A party is underway in Dulcinée’s garden. Yet the beauty has become bored with her admirers. She thinks of how fleeting love is. But then her mood changes and she sings a song praising the joys of short hours of true passion.
When the guests move off to feast in the dining room, Sancho Pança appears and pompously announces Don Quichotte’s arrival. Don Quichotte, sensing that his adventures are approaching an end, promises Sancho an island or a castle as a reward for his loyal service. In the presence of the guests as they come back to the garden, he returns the necklace to Dulcinée and asks her hand in marriage. Dulcinée is delighted at the necklace but turns down the offer of his hand and heart. Sending her guests away, she consoles the despairing Don Quichotte by telling him she feels dedication and tenderness for him but is unworthy of his love.
The guests return once more and laugh at the poor knight. But then Sancho comes to the defence of his master and leads him away, crushed by Dulcinée’s rejection.

Act V
On a mountain path Don Quichotte is resting, leaning against a tree trunk. Sancho tries to console him as best he can. Feeling the approach of death, the old knight remembers his promise to reward Sancho with an island – an island of dreams.
Thinking of Dulcinée, Don Quichotte dies, reconciled and at peace.
Sancho Pança weeps inconsolably.


“So, you too, the famous Knight of the Rueful Countenance, did not escape the fate of all famous heroes of literature. And you undertook your own travels onto the stage!” wrote one critic who on 19 February 1910 attended the premiere of the opera Don Quichotte in Monte-Carlo. Strictly speaking, the cavalier of La Mancha had already “made it” onto the stage of the opera house, though never before with such triumph. To a great extent, Massenet’s last opera owes this triumph to one legendary performer of the title role – Fyodor Chaliapin. It was specifically for him that the opera was in fact written. And so Don Quichotte is that rare example of an opera for a basso cantante, a “singing bass”. In as much as the role of Sancho Panza is also performed by a low male voice and the role of the fair Dulcinée by a mezzo-soprano, the entire cast of protagonists here forms an ensemble that is unusual in terms of its colours.
The book and the opera are separated by three hundred years: Cervantes’ novel about the cunning hidalgo was published between 1605 and 1615. The connecting link between the late-Renaissance epic and the compact and late-Romantic opera was to come with the French poet Jacques Le Lorrain’s play (1904). In the play, and subsequently in the libretto by Henri Cain, Dulcinée changed utterly: from a village girl she became transformed into a courtesan surrounded by admirers. The love story in Don Quichotte is notable for its heartfelt sincerity: the role of del Toboso the femme fatale was intended for the Parisian singer Lucy Arbell, with whom the sixty-seven-year-old and terminally ill composer was in love. While referring first and foremost to the French play, the creators of the opera nevertheless turned to the Spanish original, including in the libretto the famous scene with the windmills which Le Lorrain had omitted.
Massenet christened his opus a comédie héroïque. As in French grand opera, here there are five – albeit short – acts and myriad crowd scenes with choruses and temperamental dances. Don Quichotte can be equated with the genre of French lyrical opera thanks to its spoken dialogues (in accordance with Massenet’s wishes, these are performed in the language of the country where the opera is being performed). The reigning Spanish flavour in the opera is just one example of the pan-European interest in Spain, and it was the French who set the tone.
In the Mariinsky Theatre’s Don Quichotte the three important lines – Spanish, French and Russian – are subtly woven together. The opera was staged in 2012 by Yannis Kokkos – a French stage director and set designer of Greek descent. He opted to take the book as the dominant element of his stage designs: the opera’s characters literally descend from its pages. But this folio is not just Cervantes’ novel; the book becomes a symbol of an ideal world inhabited by the freakish old man Alonso Quijano. Books feed his imagination, inspire him to great achievements and obscure reality to such a degree that, in the words of Turgenev, “the most undoubted materiality disappears before his eyes, it melts like wax in the fire of his enthusiasm.” It disappears as if in a mist, and it is not by chance that Yannis Kokkos covers the stage with a bluish smoke. The director called the travels of the fantasist knight “a journey without movement in a single space” and “variations of a dream”. The ghostly atmosphere of French fin de siècle is recreated by a theatre of shadows: on the theatre backdrop, the silhouettes of horsemen are projected, one of them astride a fine steed, the other on a donkey. Once on-stage, in comparison with the book the figures of the horse and the donkey seem like tin souvenirs, and Don Quichotte himself conjures up a mental image of a popular Kasli statuette which, in turn, leads to the legendary prototype created by Chaliapin.

The music of the opera, regardless of the tempestuous Spanish rhythms, the click of castanets and the plucking of the guitar, is sad. Difficult themes are touched on in Don Quichotte: getting old, loneliness, dying. Massenet did this, however, without any unnecessary exaltation, with staggering nobility, warmth and simplicity. The emotional power of the final scene, heralded by the heartfelt cello solo, is enough to affect any critic. At one time Chaliapin admitted that on hearing Don Quichotte he had been “crying like a cow”. But in Massenet’s music there is no despair; the death of his hero is Liebestod, death in love, which reunites the dreamer with his trampled ideal to the aching strains of the violin, viola and harp. Khristina Batyushina

Running time 2 hours 30 minutes
The performance has one interval