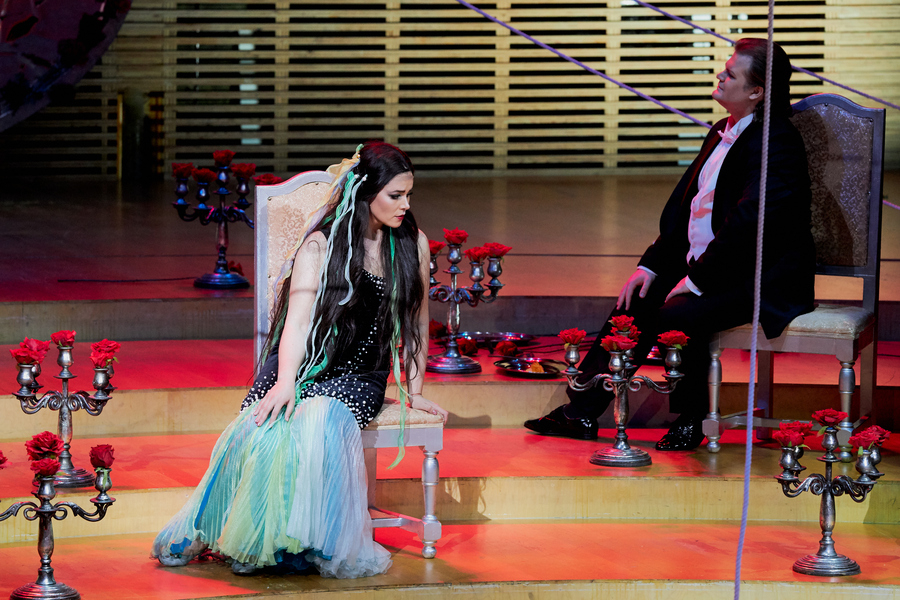 Act I
Not far from the hut of Ježibaba, Rusalka sits forlornly on the shore of the lake. The wood nymphs have awoken the old Water-Sprite, Rusalka’s father, with their singing, and he has swum to the surface of the lake. Frightened, the nymphs depart, and Rusalka tells her father of her grief. She has fallen passionately in love with a handsome prince and is ready to do whatever it takes just to be with him. She wishes to acquire a human soul. The Water-Sprite is dismayed: this love will bring his daughter much woe and grief. Because having a soul means to suffer! However, touched by his daughter’s prayers, he sends her for advice to Ježibaba. Rusalka sets off for the old woman. The latter agrees to assist, but on a certain condition: when she becomes human, Rusalka will have no power of speech, and if she loses the love of the Prince she will be transformed into a will-o’-the wisp of the swamp and lead her beloved to death. Rusalka agrees to the risks. The transformation is complete. As the sun rises over the lake, the Prince appears, having got lost while on a hunt. He sees the beautiful maiden, and, falling in love with her at first sight, he takes her to his castle.

Act II
AT the castle, the Prince is preparing for his wedding. The servants are all discussing the event in as lively a way as could be imagined, and are surprised by the mysterious appearance of the bride. The bride is downcast. A beautiful and coquettish Princess who is visiting the castle is taking up more and more of the Prince’s attention. The ball begins, and celebratory music can be heard while the guests make merry in a carefree whirlwind of joy. The Water-Sprite, who has stolen into the park, sees with pain how his daughter is suffering in silence. Rusalka tries to draw her betrothed to her side, but he rejects her. In front of Rusalka, her eyes filled with misery, the Prince declares his love for the Princess. Rusalka runs from the castle, protesting to the Water-Sprite of her betrothed’s infidelity. The Water-Sprite if filled with wrath, and he curses the Prince to die; taking his daughter with him, he disappears into a deep whirlpool.

Act III
Rusalka returns once more to the lake in the woods. She has been transformed into a will-o’-the wisp and is cursed to roam eternally. Ježibaba offers to remove the curse; to do this Rusalka must kill the Prince. But could she raise her hand against the man who means more to her than life itself? The Hunter and the Kitchen-Boy come to Ježibaba. They ask for medicine for the Prince who is dying from woe: his transitory fascination with the Princess has passed, and the Prince’s thoughts belong to his bride who has vanished without trace. The Water-Sprite drives the servants away, but soon the Prince himself appears at the lake. He calls on Rusalka, and she appears from the watery depths. The Prince joyfully advances towards her but she stops him. Rusalka still loves her betrothed passionately. She forgives him her suffering. Her touch will be fatal to him. But the Prince does not need a life where his beloved does not exist. He kisses Rusalka and dies in her arms.

The extraordinarily wide-spread 19th century plot device of a water nymph’s love for a young man of this world is familiar in literature, in painting and in music: it can be seen in Hoffmann, Pushkin, Dargomyzhsky, Andersen and many other authors. It is symbolic that this series and the entire tradition of Romantic musical fairytales should conclude with the opera by Antonín Dvořák, appearing as it did precisely at the turn of the 20th century: its premiere took place in early 1901.

A classic of Czech music, Dvořák left an expansive legacy of both symphony and opera music. of his ten operas, however, only Rusalka would go on to attain international popularity – today, not without some justification, it is considered one of the composer’s finest works.

The subject of the opera unfolds with a familiar and well-known plot that is close to us all (the kinship with Andersen’s fairytale is particularly notable): the desire to overcome the barrier between the world of natural spirits and the world of living men and women comes with a high price and inevitably leads to a tragic dénouement. the music for Rusalka marks one of the peaks of Dvořák’s lyricism, being rich in picturesque orchestral tableaux and memorable vocal melodies, among which, without any shadow of doubt, is the most famous highlight of the entire opera – Rusalka’s aria “The moon in the sky” from Act I.