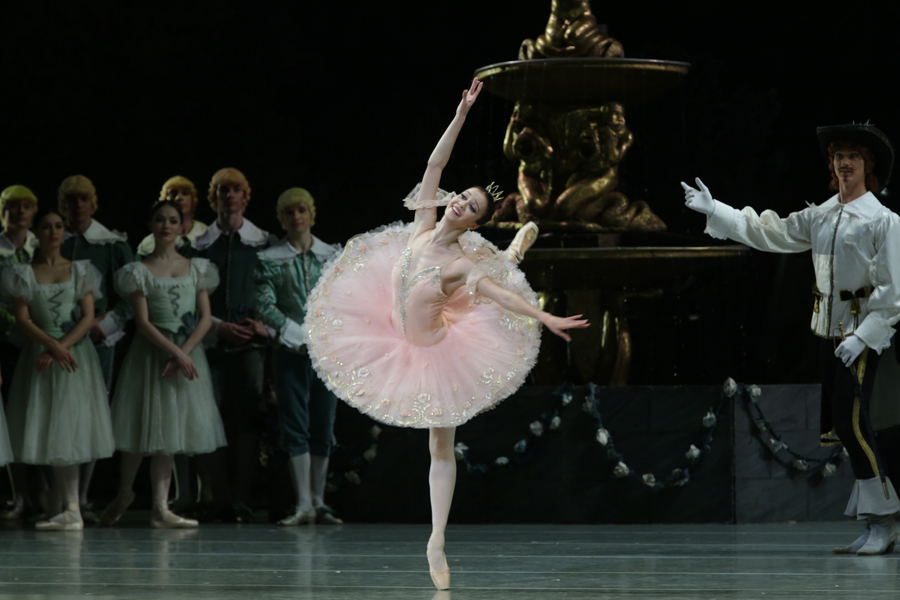 Prologue
The King and Queen are celebrating the birth of their daughter, Princess Aurora. The Lilac Fairy and her attendants appear to the gentle sounds of harps and violins. The good fairies – the Tender Fairy, the Playful Fairy, the Generous Fairy, the Brave Fairy and the Carefree Fairy – all arrive. Each has brought a gift for the new-born Princess. Terrified servants announce that Carabosse, the evil fairy, is on her way. The old and ugly Carabosse draws up in her chariot, driven by monsters and mice. She is furious that they forgot to invite her to the ball. Carabosse calls forth a vision of the young Aurora and says she will prick her finger on a spindle and die.
The Lilac Fairy drives Carabosse from Aurora’s cradle and promises to protect the Princess. Good has won this battle against Evil. Carabosse leaves the palace, fuming and enraged. In order to prevent the tragedy foretold by the evil witch, the King issues a command forbidding the use of spindles in his kingdom on pain of death.

Act I
Princess Aurora is now sixteen. The palace is filled with guests. The suitors are presented to Aurora. She is kind to them all and dances with each of them, without bestowing her favour on any particular one.
An old woman with a bouquet of roses approaches the Princess. Aurora takes the bouquet and dances a waltz. Suddenly, pricking her finger, the Princess falls, senseless. A sharp needle was hidden amidst the flowers. Everyone is grief-stricken. At this instant, the old woman’s cloak slips from her shoulders.
It is the evil Carabosse, in triumph. Drawing their swords, the suitors throw themselves upon her, but the witch disappears. Aurora’s protectress the Lilac Fairy appears. She is unable to undo Carabosse’s evil spell, but she can soften its effect. “Aurora is not dead-she is merely asleep,” says the good fairy, and with a wave of her magic wand sends the entire kingdom into a one-hundred-year’s slumber. The grounds become overgrown with lilac bushes, hiding the castle deep in a forest.

Act II
Scene I
One hundred years have passed. Prince Désiré is hunting in the woods with his friends and retinue.
Once he is alone, the Lilac Fairy appears before him. She calls forth Aurora’s image. The Prince is captivated and reaches out to her, but Aurora, dancing in the midst of the spirits, moves away and disappears. The Prince desperately wishes to see her again.
Together with the Lilac Fairy, Prince Désiré sails towards the sleeping castle. They are surrounded by the silent forest. The towers of the royal castle can be seen through the dense wood.
Scene II
The overgrown park is inhabited only by the evil Carabosse and her attendants. They bar the way to all who attempt to enter the sleeping kingdom. Suddenly, they hear sounds indicating that the Lilac Fairy is approaching. Carabosse is powerless before her.
In the meantime, Désiré has already reached the walls of the royal castle.
Looking for the Princess, he hurriedly passes by the sleeping court. He approaches the couch where Aurora lies in a deep sleep.
Désiré wakens the sleeping beauty with a passionate kiss. The whole kingdom awakes with her. Aurora and Désiré feel all the passion of first love.
Enchanted by Aurora’s beauty and charm, the Prince asks the King and Queen for their daughter’s hand.

Act III
Aurora and Désiré’s magnificent wedding is being celebrated at the palace.
The many guests include characters from fairytales. There is Bluebird and his wives, Princess Florine and the Bluebird, Puss in Boots and the White Cat, Little Red Riding Hood and the Wolf and Hop O’My Thumb and his brothers, with the Ogre chasing them. Cinderella runs by, losing her slipper. Prince Fortuné picks it up.
The Diamond Fairy, the Sapphire Fairy, the Golden Fairy and the Silver Fairy come to congratulate Aurora and Désiré.
Aurora and Désiré, the radiant newly-weds, perform a festive duet.

Apotheosis
General rejoicing. The fountains are playing. The Lilac Fairy, symbolising the eternal triumph and victory of Good, rises above the gushing cascade.


The life-changing meeting between Pyotr Tchaikovsky and Marius Petipa was initiated by Ivan Vsevolozhsky, Director of the Imperial Theatres. It was his idea to stage a ballet based on the French fairy-tale, he wrote the libretto, he created the unbelievably beautiful costumes and he was the co-creator of the miracle born from the genius of two great maestri.
The Sleeping Beauty was both completely traditional and utterly fresh. Its music, like other ballet scores of the latter half of the 19th century, had been composed according to the choreographer’s specific plan with indications as to the number of bars and the nature of their sound. But the execution of the commission did not limit Tchaikovsky’s music to the expected dance character alone. The ballet resounded with full-blooded exemplary symphonism. Its melodic richness could not but inspire great achievements. Tchaikovsky’s work did not inspire Petipa to undertake revolutionary steps; in the music the choreographer heard harmony. And his Sleeping Beauty was not a search for new methods; rather in its ideal construction it assembled together everything that the choreographer had done over his many years of work at the St Petersburg Theatre. The dance harmony of the production was defined by the balanced proportions of the ingredients – pantomime, genre crowd scenes and classical dance forms constructed with impeccable logic of the development of choreography, from ensembles to the ballerina’s solo entrance. This model of grand ballet, familiar for its component parts and innovative in the perfection of its composition, was to be the crowning glory of ballet in the 19th century. At the same time, it was The Sleeping Beauty that gave an impulse to ballet discoveries in the 20th century. Enchanted by Tchaikovsky, Petipa and Vsevolozhsky’s masterpiece, Alexandre Benois – and the subsequent most radical ballet creators – created works in the spirit of years-gone-by and remote cultures. The fascinating atmosphere of France during the reign of Louis XIV, reproduced in The Sleeping Beauty, opened the gates to the modernistic stylisations of the World of Art movement. Olga Makarova

The Sleeping Beauty
on the playbill