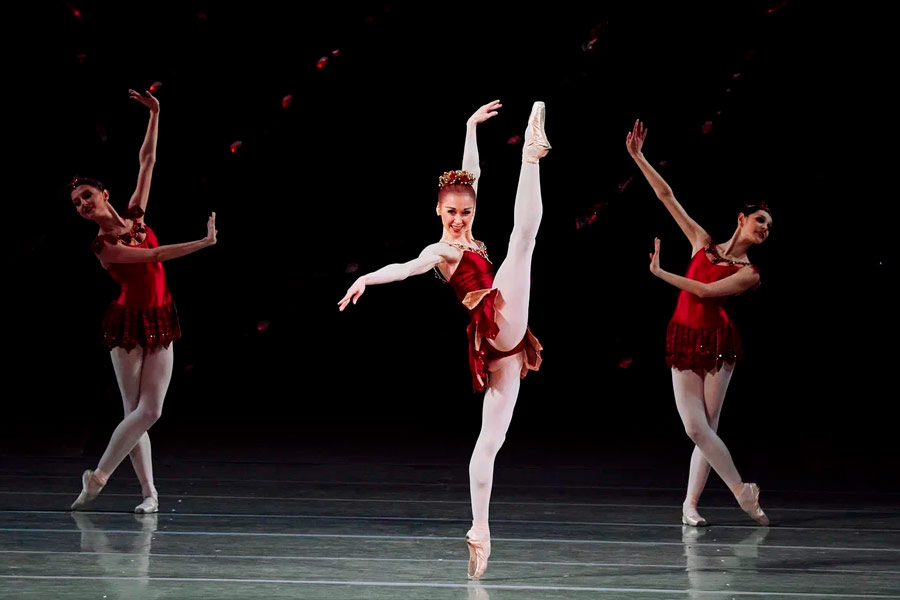 Jewels is one of Balanchine’s best-loved ballets in Russia. It has long been one of the choreographer’s calling cards at the Mariinsky Theatre as well as one of the Mariinsky Theatre’s own calling cards in the eyes of the world. None of this is surprising: the culmination of this ballet is the theme of the Russian classical school – something very close to Russian dancers – which ultimately produced the American Balanchine, the greatest choreographer of the 20th century.
As we know, George Balanchine – born Georgy Melitonovich Balanchivadze in St Petersburg – trained at the famous Theatre School (today the Vaganova Academy of Russian Ballet), worked at the Mariinsky Theatre and only in 1924 did he emigrate, first for Diaghilev’s Ballets russes and later the tabula rasa of “non-balletic” America. A citizen of the world, he easily integrated into new cultural expanses, though he retained an incredibly high regard for his alma mater; it was this particular blend of classical training with free and modernist thinking that formed the basis for his art. Jewels is also an example of where his own legacy meets with the Russian school.
At the same time, this ballet is not entirely typical for Balanchine himself. First, it is too specific. Not, indeed, the plot (here, too, Balanchine of course remains an apologist for plot-less ballet, for pure dance) – not the plot, but rather the very material images on which it is based. In 1967, Balanchine, having for thirty years been consistently leading the public towards the concept of pure dance, elevated to such a level of conditionality as exists in music alone, here staged a ballet about precious stones in the spirit of the most archaic possible allegories! He also tells the touching story of how Nathan Milstein, his friend and a great violinist, introduced him (Balanchine) to the jeweler Claude Arpels and how he admired his collection of “stunning stones”, resolving to stage a ballet “about gemstones” without delay (to be more precise, a ballet with costumes adorned with emeralds, rubies and diamonds set to music by Faure, Stravinsky and Tchaikovsky). He innocently added “I’m a Georgian, I love beauty!” The idea that he rejected the idea of a fourth part (sapphires and Schoenberg) merely because “it is hard to reproduce the colour of sapphires on the stage” Balanchine always met with a sly smile. He adored such mysterious trifles and the frivolous tone in which he deliberately simplified the essence of his dazzling works – in all probability because he did not think it at all necessary to express it in words. But if ever he had to supply some written commentary he would compare the work of a choreographer to the art of a master chef and applied a deliberately naive intonation to the vital synopsis of his ballets. He wrote, for example, that “Then comes a variation of the female soloist to light and elevated music. This is followed by the dance of another female soloist.” Or, as in another case, “Stravinsky and I just decided to use this music, arranging it in a suitable manner for the lead pair of dancers, the female soloist and the corps de ballet of men and women.”
In actual fact, all of these gemstones and their colours as well as the symbolism connected to them prompted Balanchine to create a virtuoso work that is incredibly complex in terms of form and extremely light in terms of its feel. As we have already said, Jewels consists of three parts – green (emeralds), red (rubies) and white (diamonds). Here Balanchine, as never before, embraced the possibilities afforded by the three-part format: the three pieces of music by three more than different composers are so independent that they are not infrequently performed as individual ballets, yet at the same time they are united by a common idea that means they can only be expressed fully when performed together. Even the costumes – long tunics of the Romantic era in Emeralds, short skirts in Rubies and classical tutus in Diamonds – are all linked together and have numerous strata of ideas: three cultures, three ballet schools, three images and three kinds of ballerina.
Balanchine wrote about Emeralds that if this part depicts anything at all then it could be his own memories of France: “A France of elegance, comfort, fashion and perfume...” There is, however, neither comfort nor fashion there, though there is a delicate fabric of dance, dance responses to the indistinct calls from Faure’s music and, apropos, reminiscences about Russian classical ballets. Who knows, perhaps here we have a reflection of his own youth in Paris, then still full of Russian and childhood memories? Though it is Rubies that is more closely associated with the “presumptuous” young Balanchine.
Rubies, the second part, comes as an energetic contrast to the first. The staging is sharp, witty and with a piquant note of irony. Here Balanchine steps forward as a gambler, in a dialogue and friendly rivalry with Stravinsky: it is this swordplay of choreography and music that forms the inner plot of Rubies. There is, however, also specific imagery here: although Balanchine declared that he never intended it to be an image of America, it can nevertheless be seen here clearly enough – jazzy, sporty and life-loving America.
Diamonds is, of course, the Russian part, and not just because of Tchaikovsky. This is an image of classical St Petersburg ballet, it is an image of its utter majesty, its apex and – at the same time – a portrait of it, filled with admiration and worship created by someone who had long since become a great American. Inna Sklyarevskaya