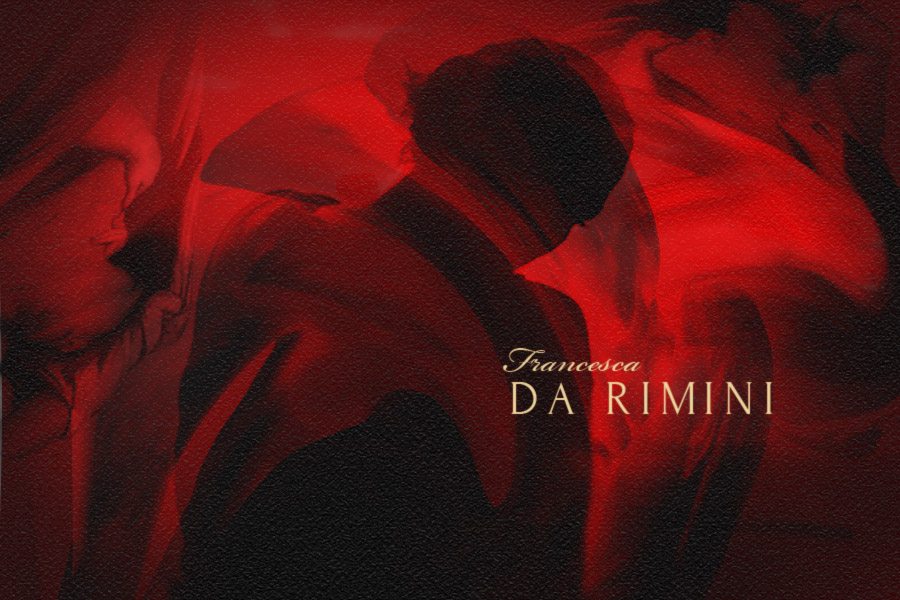 Prologue
The first circle of Hell, with rocky crags and gloom. The shadows of Virgil and Dante appear. In fear, they descend. In a whirlwind of groans and screams of despair the souls of those suffering fly past. Among them Dante espies two sad shadows. The poet turns to them, asking that they reveal who they are. In response, the voices of Paolo and Francesca can be heard: "There is no greater sadness in the world than to remember a time of joy in a time of grief..."

Scene 1
Rimini. The Malatesta Palace. Lanciotto prepares for a crusade against the Pope's enemies and orders the servants to summon his wife. He considers how he has deceived Francesca: sending Paolo's brother for her, at the insistence of Francesca's father, he has concealed the fact that he will lead her to the altar merely as Lanciotto's representative. She has sworn before God to be a faithful wife to Paolo. Arriving in Rimini, Francesca has learned that her husband is not the handsome Paolo but rather the lame and deformed Lanciotto. Now Lanciotto's soul is tormented by suspicion: Paolo is so handsome and so gentle with her. Lanciotto wants to be certain of his wife's treachery. Francesca enters. Malatesta explains to her about the crusade. While her husband is away, she suggests entering a convent for a time, but he leaves her under Paolo's care. Francesca is ready to accept any decision of her husband. He is gripped with despair: he wants love, not submissiveness! But Francesca cannot lie. She asks when her husband will return, and he replies that it will be when the enemy has fallen, not before. After Francesca leaves, Lanciotto laughs with malicious glee: "When will I return? You'll find out soon!"

Scene 2
A room in the Rimini Palace. Paolo reads Francesca a story about Lancelot and the fair Guinevere. Under the impression of what he has read he is unable to conceal his feelings and falls to his knees before Francesca and sobs. In vain she comforts him: the time of earthly wanderings is brief, and bliss awaits them in the next world... But Paolo rejects paradise with its impassive beauty; he wants bliss on earth! He embraces Francesca. "With you Hell is better than Heaven," she admits. Suddenly Lanciotto appears. He raises a dagger above the lovers and pronounces an eternal curse on those who break their vows. Clouds obscure everything. Francesca and Paolo's rending cries can be heard. They are answered by screams and cries from the suffering souls.

Epilogue
Another circle of Hell. "Oh, that day we read no more!" exclaim the shadows of Francesca and Paolo as they vanish among the hellish vortexes. Dante stretches out his arms to them and falls backwards.


Running time 1 hours 5 minutes
The concert has no interval