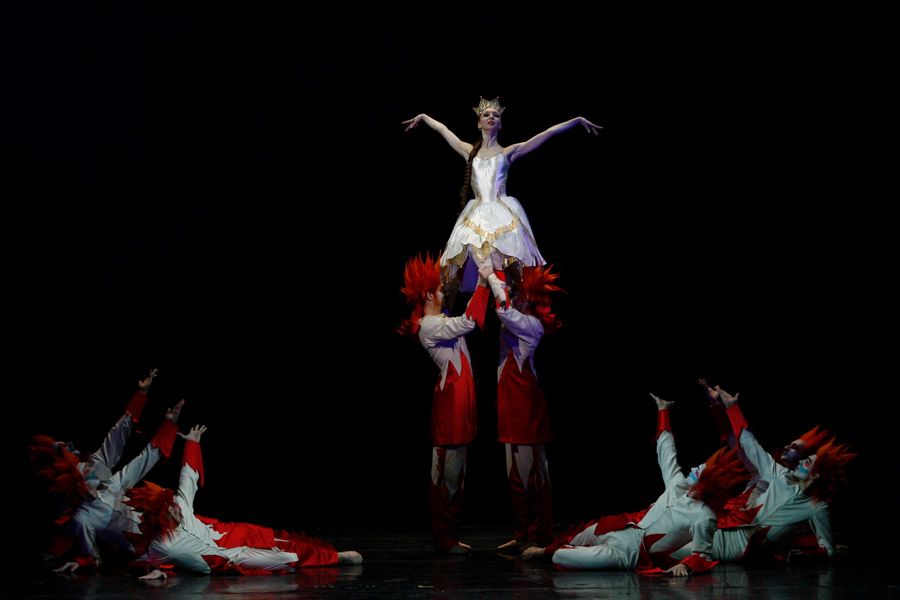 ballet by Alexei Ratmansky set to music by Rodion Shchedrin

The Little Humpbacked Horse is a successful blend of many of the ingredients necessary for success – the fairy-tale plot so attractive for children, the ironic interpretation that is interesting for adults, the extravagant and stylish designs by Maxim Isaev, the talented and inventive choreography of Alexei Ratmansky and the emotional music of Rodion Shchedrin.
The score of the ballet The Little Humpbacked Horse was written by the young Shchedrin, then still a student at the Moscow Conservatoire. With its humour, mischief, colourfulness and affirmation of life it has inspired many musicians and choreographers. Everyone can find something individual in it. Alexander Radunsky, the choreographer of the first version of Shchedrin’s The Little Humpbacked Horse at the Bolshoi Theatre (1960), heard a traditional ballet fairy-tale in it, with ballerina princesses, tsars who didn’t dance very much and traditional divertissements that filled the ballet with dance. Igor Belsky, who staged his own version of The Little Humpbacked Horse at the Maly Opera in 1963, heard sharp satire in the music. First and foremost this concerned the image of the Tsar; it also matched the literary basis, Yershov’s fairy-tale, and the ideological framework of the age when the score was composed. The Tsar in Belsky’s ballet unambiguously brought Khrushchev to mind with his gestures. In 1981 Dmitry Bryantsev staged his own version at the Kirov Theatre, combining fairground decorativeness with incredibly human portraits of the protagonists.
Ratmansky’s ballet is a child of the early 21st century; in this dynamic, merry and ironic production there is also enough room for the dance itself, both classical and character, mime scenes, serious virtuoso skill and reckless humour. Interestingly, Ratmansky’s humour comes not at all from the playful scenes, mimes or gestures; the choreographer can make the audience smile through the actual dance. His divertissement in the production is a witty paraphrase on the theme of traditional divertissement character pieces. From the standpoint of a contemporary postmodernist, the choreographer looked at the old tradition of “revising” folkloric dance steps for classical productions, and he has brought this to life with a bold sense of humour. Recognising the quotations gives the choreography historic depth, and without having to solve the enchantingly ironic rebuses the production is engaging enough in its merriment. The dances conjured up by the choreographer are also interesting for the dancers, each role opening up a broad expanse in which to be creative – on the one hand, for acting skills and improvisation and, on the other, to test themselves with this technically demanding dance text. If, in the role of the amusing and grotesquely presented duffer that is the Tsar the playful element is richer than the dance component and the expressions of the “splinted” Father and Brothers of Ivan are simple in terms of the movements, then Ivan the Fool and the Tsar Maiden, in some scenes childishly capricious and in others virginally tender, and the fleet-footed and dexterous Horse reveal their characters through the dance. Olga Makarova

Runnig time 2 hours 15 minutes
The performance has one interval