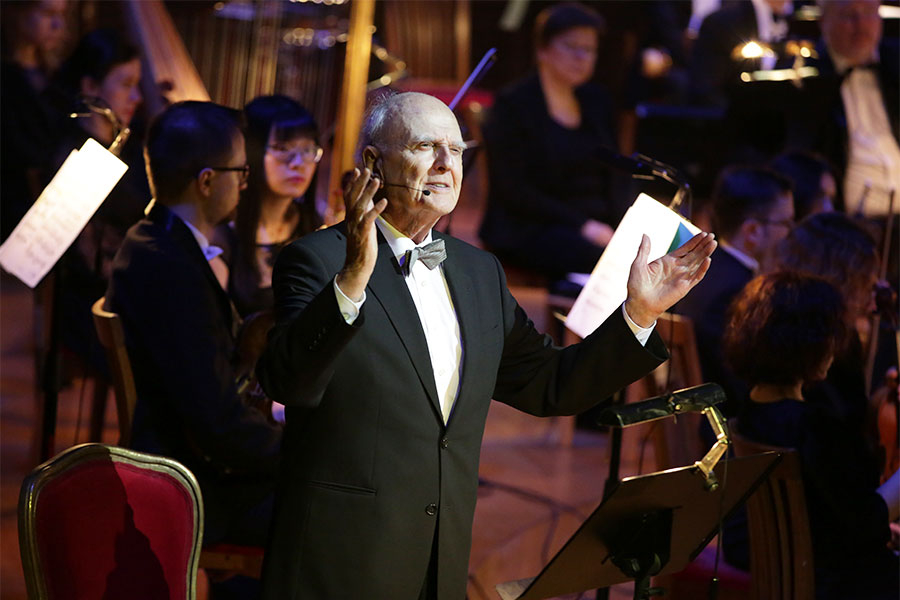 Performance duration 1 hour 20 minutes
The concert has no interval

Edvard Grieg's music for Henrik Ibsen's play is almost more compelling than the Norwegian dramatist's telling of the story of the unprincipled and exiled fantasist-adventurer Peer Gynt. Using twenty or so pieces of music, Grieg compiled two suites, each of them having four movements. The unfailing “best-sellers”, in precedence to all the others, were destined to be the movements from Suite No 1: Morgenstemning (Morning Mood) which is filled with a tender light, the mournful Åses død (The Death of Åse), the refined Anitras dans (Anitra's Dance) and, of course, the brutally grotesque march I Dovregubbens hall (In the Hall of the Mountain King). Suite No 2 is somewhat less well known, though it concludes with one of the most recognisable melodies in the entire classical repertoire – the heartfelt Solveigs sang (Solveig's Song). The child of two equally great creative artists, Peer Gynt presents two distinctly different faces: whereas the playwright focussed on social and philosophical problems, the composer set his mind on lyricism. At the core of Ibsen's drama is an absolutely non-romantic hero, while Grieg composed music that is utterly romantic. Unsurprisingly, among the eight movements not one of them is dedicated to the protagonist: there are musical portraits of three of his girlfriends, there is a musical epitaph to his mother, there are musical tableaux-sets – on the earth, under the earth, at sea, there are parts with southern and northern flavours, but about Peer Gynt himself the music remains stubbornly silent. The subheadings of Grieg's movements give rise to a plethora of enigmas for any listener unfamiliar with Ibsen's play: how did Åse die, why does Ingrid lament, from whence has Peer Gynt come and whither does he return?

At the Mariinsky Theatre, Grieg's musical scenes are once again interwoven into Ibsen's plot. A narrator relates Peer Gynt's adventures, alternating a concise retelling of the events with selected verses from the play. His words flow naturally into the music, performed by the symphony orchestra, and at times they are superimposed on it. This theatrical adaptation is limited to lighting effects, of all the characters only Solveig appearing on the stage. The audience's entire attention is focussed on the masterful reading by Nikolai Marton, the magnificent sound of the orchestra and the pure and pliant soprano voice of the soloist. This gripping concert programme is eminently suitable both for children and for those with limited experience of listening to philharmonic music. In the matinee programme of the concert only Peer Gynt is performed, while the evening programme additionally features the suite Fra Holbergs tid (From Holberg's Time). Holberg's time was the first half of the 18th century, the style of which Grieg interprets in this original opus – a five-movement baroque dance suite written by a Romantic composer. Khristina Batyushina