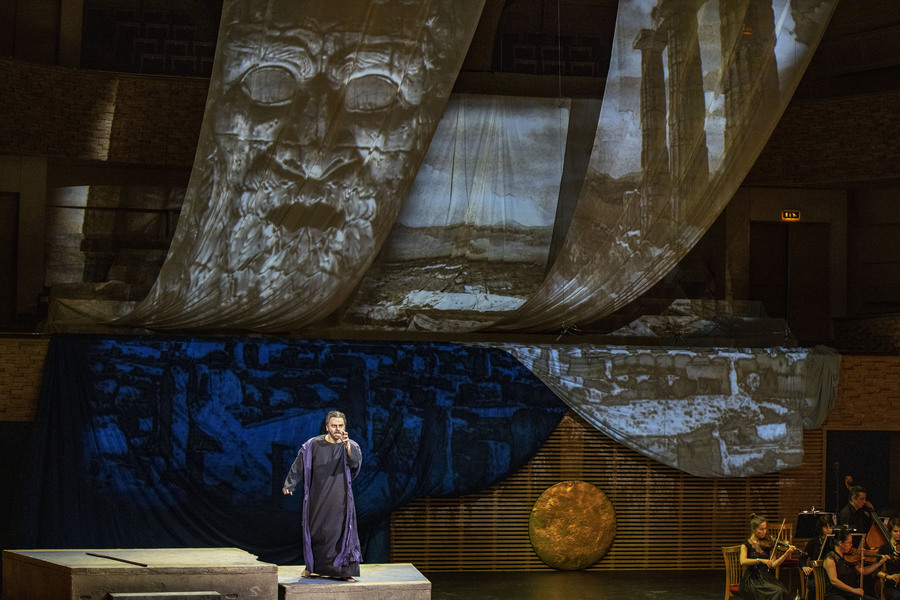 Dear guests, on September 17, instead of the opera Ariadne auf Naxos (concert performance), a semi-stage performance of Wolfgang Amadeus Mozart's opera Idomeneo, re di Creta will be presented.

The Trojan War is over. On his way home Idomeneo, King of Crete, having been one of the most influential Greek military figures, is caught in a powerful storm. He promises Neptune, God of the Sea, to sacrifice to him the first person he meets on shore.

Act I
At the peak of the storm, Idomeneo´s son Prince Idamante has saved Ilia, daughter of King Priam of Troy. She has fallen in love with him but does not dare declare her feelings to him. Idamante has also freed the Trojan prisoners. Elettra, daughter of King Agamemnon and Orest´s sister, having fled to Crete from Argos, also loves Idamante. When Arbace the Prince´s mentor relates that Idomeneo, having desired a marriage between Elettra and Idamante, has drowned in the storm, she understands that her own wish to marry Idamante will not come to fruition. Her jealousy and longing for revenge burst forth. Idamante runs to the shore in despair to find his father.

Act II
Arbace and Idomeneo are trying to find a solution to a difficult situation: Idomeneo decides to send his son off with Elettra to Argos. Ilia appears before the King and he is drawn to her. But Ilia tells Idomeneo that she regards him only as a father. After she leaves, Idomeneo, in a fit of anger, realises that his soul will face a greater storm than that which he barely survived.
The only person to approve the turn of events is Elettra. She is permitted to leave with the Prince, whom she loves, and at the same time be rid of her rival Ilia. Idamante reluctantly submits to his father´s order. But when he and Elettra approach the ship which is to take them to Argos another storm gathers and a terrifying beast emerges from the sea. It has been sent by Neptune to punish Idomeneo. Idomeneo admits his guilt though he refuses to sacrifice an innocent person. The storm continues and all flee.

Act III
Ilia declares her feelings to the sleeping Prince. When he awakes and declares his intent to battle the monster she again speaks to him of her love. They are interrupted by the unexpected appearance of Elettra and Idomeneo, who demands that Idamante and Elettra depart immediately for Argos, refusing, however, to explain to his son the reason behind his decision. In despair Idamante withdraws before his departure for Argos, in order to fight the monster which has brought plague and ecological disaster to Crete.
Accompanied by the crowd, the High Priest approaches the palace, savagely demanding the name of the man to be sacrificed. Idomeneo then admits that his son Idamante should be sacrificed. Arbace mourns the fate of the innocent Prince.
Suddenly there is a chorus of triumphant voices declaring that Idamante has killed the beast. The returning Prince voluntarily agrees that he be sacrificed, but just as Idomeneo is about to kill him Ilia runs in, demanding that she be sacrificed in Idamante´s place. Idomeneo admits his guilt: it was he who caused this irresolvable conflict. And so now he abdicates. Idamante and Ilia are to rule the country.
In despair, Elletra prostrates herself. The Cretans celebrate the peace and honour the new ruling couple.

“The music of my opera is for people of any description, except those with excessively protruding ears,” Wolfgang Amadeus Mozart wrote to his father Leopold with pride about Idomeneo. And yet the destiny of this opera was to prove far from simple: the successful premiere in 1781, subsequent numerous productions in the 19th century… and the disappointed verdicts of connoisseurs made in the early 20th century the music is brilliant, but the traditional genre of Italian opera semi-seria had become hopelessly outdated. It was only in the latter half of the last century that the revival of Idomeneo began, and by our own time it had returned to theatres. The legend of the King of Crete, who had almost sacrificed his only won to the God Poseidon, was interpreted as a psychological drama and as an ancient tragedy, as a moral parable, as a play about the conflict of generations, as a surrealist performance about the interrelations of mortals with the otherworldly, as a hot political pamphlet…

Idomeneo is one of Mozart’s most courageous and innovative works. Typically, the composer did not break down the genre of the canon, though he did reinvent it from inside out. In the overture to the opera seria, trumpets and kettle-drums are typical – arguably, this is all plain and evident, but with Mozart the overture is not just a pompous introduction, it is a passionate poem about the resistance between Fate and a victim.

This opera seria consists mainly of high-note arias and occasionally interspersed ensembles; Mozart transformed this “concert in costumes” into a series of psychological portraits and dramatic dialogues. The outwardly shrewish but morally just captive girl Ilia is impossible to confuse with the furious and yet deeply suffering Elettra. Idamante’s stoic nobility denotes a character who is not at all stilted: the young prince is filled with a purely youthful joie de vivre. The dark abysses in Idomeneo’s soul are illuminated by his love for his son. All of these contrasts are spoken of in the ensembles: the tercet in Act II and, particularly, the quartet in Act III, where each of the heroes experiences his or her share of grief and suffering, and Fate predestines each and all of them.

The choral episodes imbue Idomeneo with a truly tragic scale, particularly in the scene of the sacrifice in Act III. Here Mozart openly makes reference to operas by Gluck and even, possibly, surpassed the older maestro in the sharpness of his dramatic feelings.

The traditional happy end with the deus ex machina is also not a given for the conditional opera poses. Here there is Mozart’s sincere belief that the true gods are fair and merciful, and Fate is not quite so blind as it sometimes seems. Larisa Kirillina


Running time 3 hours 20 minutes
The performance has one interval