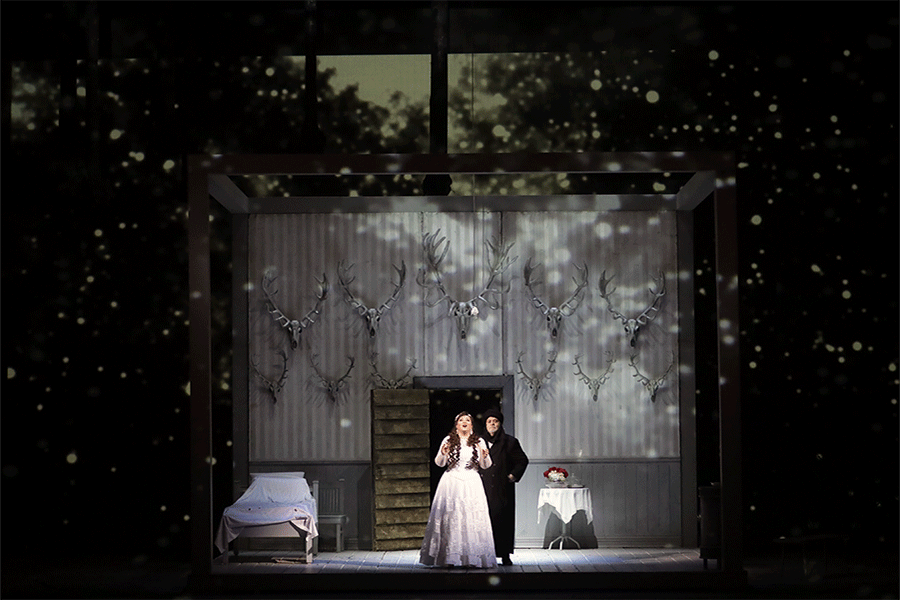 Dear guests, on September 22, instead of the opera A life for the Tsar, the opera Iolanta will be presented. Tickets remain valid

Iolanta, King Rene’s daughter, is blind. But the girl herself as yet does not know she is blind: Rene has issued a decree by which it is forbidden for anyone to speak of sight or light in her presence. Her father, friends and elderly nurse are all polite and gentle towards Iolanta. The King never abandons hope of his daughter being cured, though he is worried at the idea that in order for this to happen Iolanta must learn that she is blind and that she must desire to be able to see. The knights Gottfried of Vaudemont and his friend Robert arrive at Iolanta’s peaceful refuge. Robert cares little for Iolanta, to whom he has been affianced since childhood, while Vaudemont falls completely in love with the girl. Left alone with Iolanta, Vaudemont asks for a red rose by which to remember her. The girl offers him a white rose and then Vaudemont guesses that she is blind and tells her of the beauty of the world she is missing due to her blindness. Vaudemont’s words, however, do not rouse any desire in Iolanta to be able to see. In despair, King Rene threatens Vaudemont with the death penalty should his daughter not be cured. Fear for the life of the man who has now become close to her awakens in Iolanta the willingness to agree to an operation that will restore her sight. In the meantime Robert admits to the King that he loves someone else and so cannot marry his daughter.
On discovering that Iolanta can now see, the King forgives Robert and releases him from his own sacred oath, agreeing to permit his daughter to marry Vaudemont. At the wedding, all of the guests sing a thankful hymn in praise of God.

Iolanta, Tchaikovsky's last opera, first saw the light of day in 1892, one year before the composer's death. It had been conceived as a part of a combined performance, sharing the stage with the two-act ballet The Nutcracker (this tradition has been resurrected to in our own time by the director Dmitry Chernyakov, who in 2016 staged a coupled production at the Paris Opéra). The musical beginnings of both scores are beyond doubt, though today Iolanta and The Nutcracker are frequently seen on the stage as "testing boards". The one-act Iolanta is tried out by stage directors alongside other short operas, such as Rachmaninoff's Aleko (it was in this form that the Mariinsky Theatre staged its latest version).
The enchanting beauty and popularity of the solo pieces, the short form and fairytale plot with its happy end made Iolanta suitable material for graduation works by those at the conservatory as well as an attractive repertory title for the Russian public. And yet, behind the facade of the noble-sounding tale, one may discern symbolic drama. The protagonists may speak a great deal, yet there is little or no action, their speech contains hidden meanings, and at the centre of the story there is the heroine, bereft of sight, who needs no light "to know the beauty of the universe."
Kong Renés Datter (1845) by the Danish poet Henrik Hertz came to be known to Russian audiences in a translation by Vladimir Zotov. It called out to the expression Pyotr Ilyich made in later years about his wish to write an opera based on a "plot not of this world". The composer found both the story and the libretto to be poetic, one drafted by his own brother Modest. It must have been that Tchaikovsky was captivated by a heroine who did not consider herself unhappy because she was warmed by her faith and who was ready to die for love. The musical dramaturgy is built as a movement from darkness to light: from the troubled delusion of the introduction to the hymn of light and the eulogistic prayer in the finale (here the St Petersburg musicologist Arkady Klimovitsky even recognises the precursor of the theme of self-sacrifice from Scriabin's Le Poème de l'extase).
The current production at the Mariinsky Theatre is by Polish stage director Mariusz Treliński and his frequent co-collaborator the set designer Boris Kudlička. A magical garden, "like paradise" where Iolanta lives – a hospital chamber, with servants and friends – the cold and impersonal staff who retain their patient at a distance; the knights of Burgundy, who have advanced into this stolen spot, "wandering in the Vosges Mountains", businessmen-romantics from some alpine resort. One of the production's greatest scenes is the prologue where the stage director visualises a nightmare, the very dreams of the frightened Iolanta's subconscious.


Co-production of the Festspielhaus Baden Baden

Running time: 1 hour 40 minutes
The performance without an interval