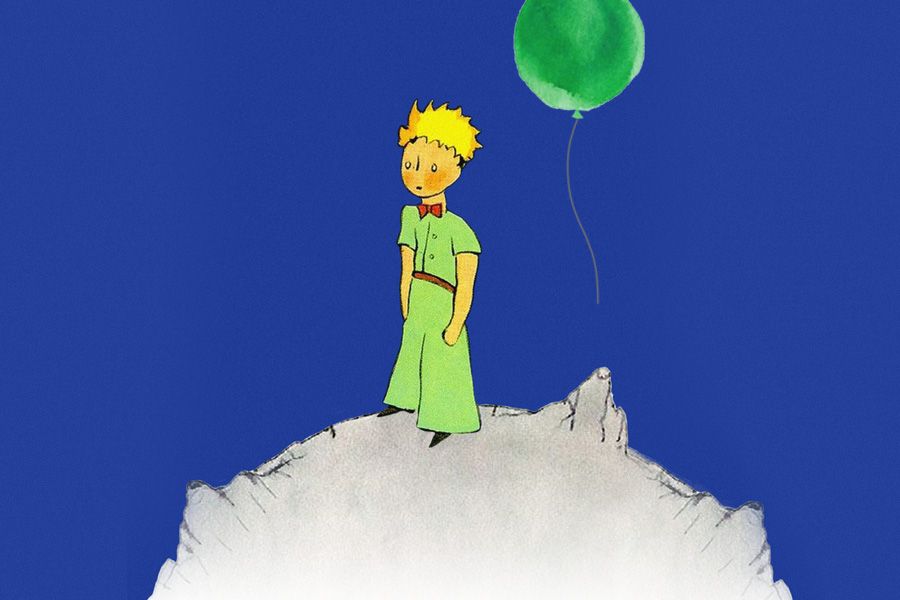 As his plane has broken down, the Pilot has to undertake an unexpected landing in the Sahara Desert. There he meets the Little Prince, who asks him to draw a lamb. The Prince tells a story about a beautiful flower that grows on his planet and worries that the lamb might eat it. The Pilot designs a muzzle and rope to keep the flower safe.

Speaking with the Rose, the Little Prince admires its beauty. He finds it hard to live with this capricious flower, but he is happy because he loves it. The Prince prepares for a journey. The rose lets him go and asks him to remember that he is always responsible for those he tames.

During his journey, the Little Prince meets the King who considers that his power is limitless, the Ambitious Person who despairs at the lack of patrons, the Drunkard who drinks in order to forget that he is ashamed to drink and the Fox who relates the cruelties of the world. Of all his new acquaintances he most likes the Lamplighter who thinks not only of his own self. The Prince would like to be friends with him, but on his tiny planet there is no room for two. Finally, in the African desert the hero meets the Snake who pities him. The Little Prince tells the Pilot who appears again that he will soon return home because today his star is in the same place that it fell one year ago.


The music of Rostov composer Leonid Klinichev is well-known to adult audiences at the Mariinsky Theatre. As a result of his collaboration with the Mariinsky Academy of Young Opera Singers several new works have appeared. The Little Prince was Klinichev's first opera, written especially for young audiences. The idea behind its creation belongs to Larisa Gergieva, Artistic Director of the Mariinsky Academy of Young Opera Singers. The composer had thought about an opera based on the famous story by Antoine de Saint-Exupéry for a long time, and so, on receiving a new commission in December 2015 already by January 2016 he had completed work on the opus.
"It is not by chance that this tale by de Saint-Exupéry has won world acclaim. Everyone has a dream. Some dream of meeting a fairy-tale prince, others of meeting amazing characters... The fairy-tale is laid out in the most basic language, with simple ideas that are immediately enchanting," Leonid Klinichev said in an interview with Mariinsky FM internet radio.
The libretto was written by the composer's daughter Madina Klinicheva, who transformed the text of the narrative into poetic verse. The most vivid characters were taken from the literary source for the opera: the capricious Rose, the wise Fox, the power-loving King, the crafty Snake and the lonely Lamplighter among others. As with any work, The Little Prince contains several hidden layers of ideas, to understand which one requires a certain life experience. Perhaps children might not understand the sub-text, and yet the main ideas will find a response, even with the very youngest. As, for example, occurs with the phrase that has long been rather pithy: "You become responsible, forever, for what you have tamed." Olga Vokina