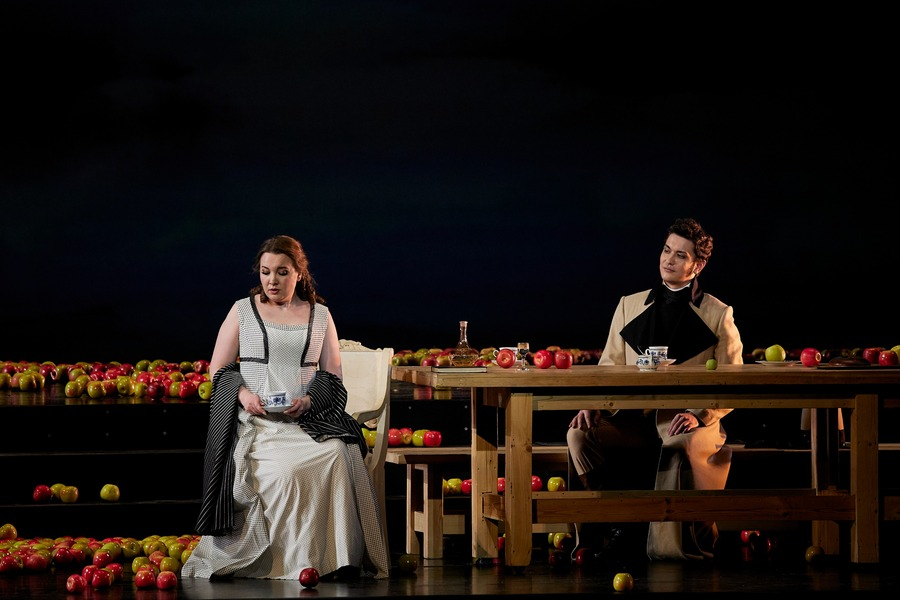 The garden on the Larins’ estate. In the distance, Tatiana and Olga can be heard singing. Listening to them, Mrs Larina and Filippievna the nanny recall their own younger days. Visitors appear unexpectedly: Vladimir Lensky, the Larins’ neighbour and Olga’s fiancé, has brought with him his friend Onegin – a young man recently come down to the country from the capital. While Lensky declares his love to Olga, the new visitor chats with Tatiana. The nanny notes how excited Tatiana is at the meeting.

Tatiana’s bedroom. Tatiana cannot sleep. Filippievna tries to dispel her anxiety with the tale of her own maidenly status. Once alone, Tatiana writes a letter to Onegin. With the arrival of dawn, she asks the nanny to deliver the letter.

The Larins’ garden. Tatiana anxiously awaits a reply. Eugene appears – he is touched by her declaration but is unable to return her love.

The Larins’ house. A ball in honour of Tatiana’s name day. Lensky has convinced his friend to visit the Larins, but the party and the guests serve to irritate Onegin. In revenge, he begins to play court to Olga. The readiness with which the young woman accepts his attentions drives Lensky to despair. He starts a quarrel with Onegin and challenges him to a duel.

An abandoned mill. Lensky and his second await the arrival of Onegin. Lensky mournfully and nostalgically contemplates the former “golden days” of his youth. At last the rival comes. The former friends are willing to forget any offence caused, but ideals of honour gain the upper hand. A shot rings out and Lensky drops down dead.

A room in a luxurious mansion in St Petersburg. Following a lengthy absence, Onegin returns to live in the capital. He finds Tatiana a married woman, now at the centre of attention having taken her place in high society. Her husband Prince Gremin speaks to Onegin of his happiness. The transformation of the young woman he knew awakens feelings of love in Onegin’s heart.

The drawing-room in Gremin’s house. Weeping, Tatiana reads Onegin’s letter. Suddenly he himself appears. With passionate prayer, Onegin succeeds in extracting a confession that she still loves him. But Tatiana’s decision is resolute: she will remain faithful to her husband.

“What else can I say?” Tatiana’s question is one that every stage director invariably asks himself when tackling Eugene Onegin – the most popular Russian opera. This is a particularly complex task at the Mariinsky Theatre, where the historic stage retains a ground-breaking Onegin – Temirkanov’s classical production from 1982. Alexei Stepanyuk staged Tchaikovsky’s “lyrical scenes” as a drama of emotions and a drama of coming-of-age. His production is authentic in that it was intended to be performed by a youthful cast – just as the composer himself had wished, having long resisted the transfer of his darling opus to a large theatre. The Larina sisters, Onegin and Lensky are very young people in Stepanyuk’s production and, as is well known, maximalism is inherent in youth. Love, rejection, jealousy, anger, insult: when experienced for the first time, these emotions stagger the souls of the protagonists and lead to catastrophic results. And even though on the stage we see the 19th century with its code of honour and social norms, the experiences of the characters are totally comprehensible to the modern-day audience, including – indeed particularly including – young people. “I would like for young people to be able to recognise themselves in my production,” admits the stage director. And so it is, all are recognisable: the shy and “bookish” girl (Tatiana), the cheerful, ruddy and frolicsome maiden (Olga), the vulnerable “artistic type” (Vladimir), the arrogant and egotistical dandy (Eugene). They are all left face to face with the most powerful emotions: the older generation, alas, is not only unable to assist (the Nanny) but even pushes the young people into an abyss (the old duellist Zaretsky). The critical coming-of-age point comes with Lensky’s death; the young poet succeeds in gazing at the distant “golden days of spring” and forever remains aged eighteen. The drama of Tatiana and Eugene is a story of “unsynchronised” growing-up, when the one “grows” to reach the emotions of the other, but, alas, it is too late.

Tchaikovsky relates to the experiences of his protagonists with absolute seriousness. Here there is none of Pushkin’s irony, there is nothing of the analytical narrator, and the distance between the writer and the characters is reduced to zero. With the exception of several genre scenes – those of balls and with peasants – the entire score is dedicated to human psychology. By becoming familiar with the images of operatic characters, the empathetic composer conveys their inner world in all its minute gradations – a premonition of love in languid dreamy visions, deceptive dreams, the “magic poison of desires”, the piercing pain of the heart: “Oh God, how insulting and how painful.” When performed by young singers, this all sounds bewitching in its sincerity. The psychological depiction of each role has been thought out to the tiniest detail, to the slightest intonation and gesture; audiences may be insistently advised to take a pair of binoculars in order not to miss the minutiae of the work of the director and of the performers. The binoculars are also useful for seeing the details of the magnificent designs (set designer – Alexander Orlov; costume designer – Irina Cherednikova) – at one and the same time laconic and vivid, commenting and summarising. The cross of St George on Gremin’s breast gives a hint: Tatiana’s husband is not at all an old man but rather a hero of the War of 1812. The whistle with which Onegin first appears at his friendly neighbours’ house anticipates his instructive talk with Tatiana. The sails of the windmill in the scene of the duel do not form part of a romantic bucolic landscape, but are instead a symbol of the relentless wheel of fortune that strikes two friends. Just as millstones will grind to dust the life of a child of yesterday, unable to escape the cruel and adult game of elimination. But the most effective and memorable visual leitmotif of the production is the apples that have become the production’s “calling-card”. In addition to affecting an appetite, the apples may have numerous associations for the audience: early autumn in a village, a heavenly garden, a rejuvenating apple, a forbidden fruit, an apple of discord.

According to Yuri Lotman, Onegin met the Princess Gremina in St Petersburg in 1822. The Mariinsky Theatre production dates this more precisely: beyond the windows of the ballroom, ice-floes pass on the River Neva. That would mean that “this precise” ball has been being performed now for two hundred years; may this unique anniversary prove a reason once again (or, indeed, for the first time) to attend Eugene Onegin – an opera with the rare gift of enchanting “all ages”. Khristina Batyushina