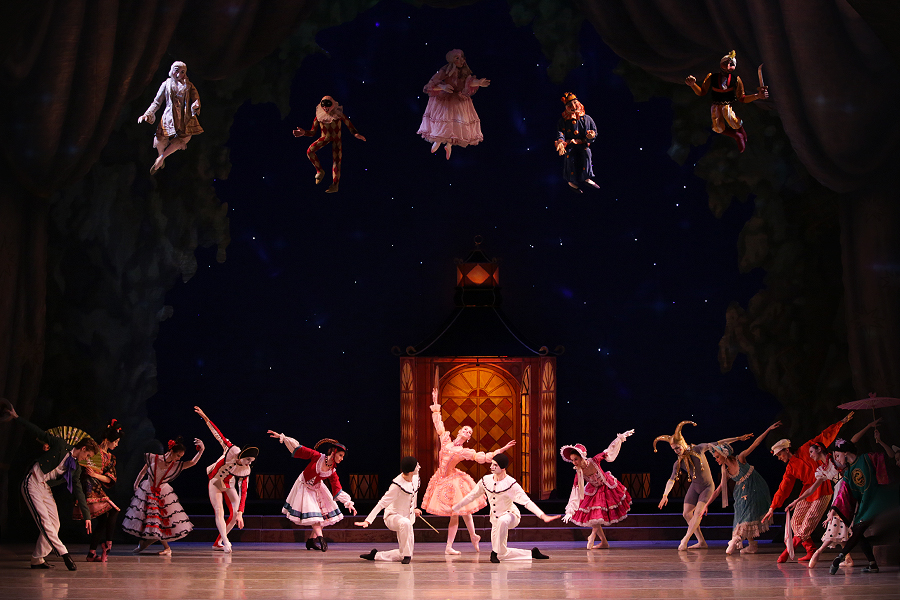 ballet by Josef Bayer
Performance by the Vaganova Ballet Academy

Students of the Vaganova Ballet Academy

A working day in a doll shop is underway. The owner gives his orders to his shop-assistants. The postman brings letters and the delivery man brings some boxes. A maid asks for a new head to be made for a broken doll. The first buyers select toys that please them. The shopkeeper demonstrates mechanical dolls to a Merchant, his wife and daughter and the family of Mr. Plumpetemer. Attempting to amaze his wealthy clients, he demonstrates the most beautiful piece he has – the Fairy Doll. She enchants the audience with her dancing – each of the girls wish to own this beautiful object. Mr. Plumpetemer and the Merchant pay and ask for their purchases to be sent home.

As soon as the last shoppers depart and the shopkeeper closes up, the dolls come to life. The Fairy invites the dolls to a ball.

This sweet ballet, staged in 1903 by the brothers Sergei and Nikolai Legat as an attraction of varied solos by ballet stars that followed one after another, was performed at the start of the last century by Mathilde Kschessinska, Vera Trefilova, Agrippina Vaganova, Olga Preobrazhenskaya, Anna Pavlova, Pavel Gerdt and Michel Fokine. In the dances to music by Bayer and additions made to his score by Tchaikovsky, Drigo, Rubinstein and Lyadov, the stars of the St Petersburg ballet dazzled audiences with their glittering skills.
The first production by the Legat brothers to a great extent also owed its success to the designs by Léon Bakst. Die Puppenfee was one of the first theatre works staged by the future darling of the demanding Parisian public and trendsetter of European fashion. The sensational success and innovative nature of the Paris performances during the Saisons russes were ahead of their time, while in the doll-like costumes and sets depicting mid 19th century St Petersburg Bakst refined his skill. As the designer’s friend and colleague Alexandre Benois later recalled (his collection of folk toys served well in the search for images for the characters in the ballet), “Levushka (Léon) was totally absorbed with work on Die Puppenfee.” One of the reasons that Bakst worked with particular fervour and inspiration on this ballet was his romance with his wife-to-be Lyubov Gritsenko. Having completed the sets for the toy-shop, the besotted designer wanted to create a portrait of his beloved and invited her to pose in his set workshop. Bakst resolved to include the resultant successful portrait in the sets. His model did not protest. “Her figure on canvas was carefully cut out and sewn on to the general backdrop of various clowns, dolls, drums, swords, waggons and other toys,” Benois recalled, “Lyubov Pavlovna was hanging there in her fashionable Paris couture black dress and a huge black hat! ‹...› As they said back then, this eccentric decision by the designer made a great impression on the high-ranking audience... Everyone in the auditorium was asking each other who the woman was whose portrait was hanging, so lifelike among the toys? Thus the heartfelt secret of the lovers became ‘the fable of the city’”...
The public adored Die Puppenfee. And although following the Revolution, in the 1920s when in the new Soviet country many masterpieces of the "imperial past" came into doubt, this production remained in the repertoire though it did not escape several decades of oblivion. In 1989 the production about the dolls was remembered by Konstantin Sergeyev, Artistic Director of the Leningrad Vaganova School of Dance; as a child he would have still been able to see it performed in St Petersburg. Sergeyev brought the ballet back to the stage, producing his own version as a production for child performers. Today Die Puppenfee is once again in the repertoire of the Vaganova Academy of Russian Ballet.
Olga Makarova