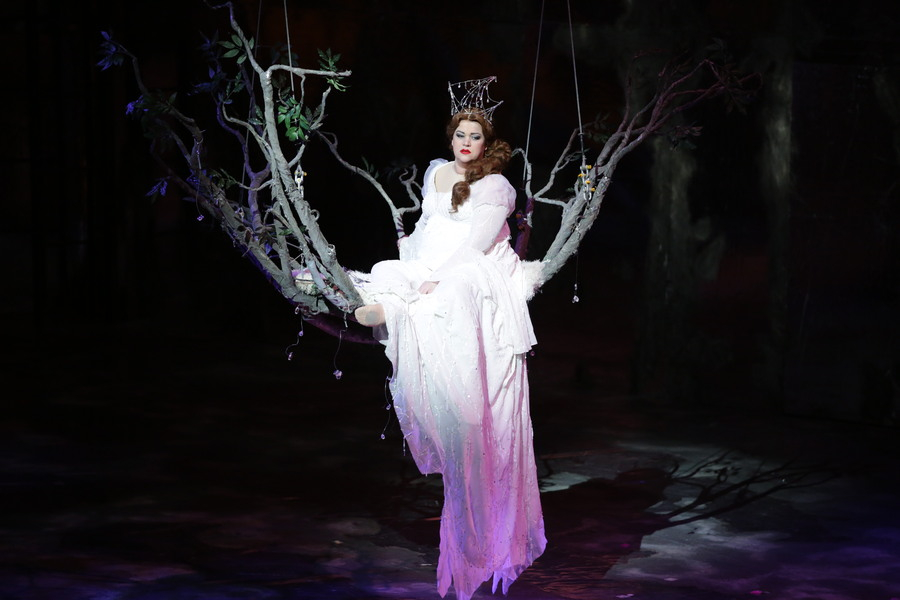 Act I
A forest near Athens. Night has fallen. Puck disrupts the fairies’ work with news that his master Oberon is on the way. Oberon, King of the Fairies, is quarrelling with Tytania, his queen, over a young boy who is under her protection. Tytania, furious at Oberon, refuses to give up the boy to him.
Oberon sends Puck to fetch a magic flower, the juice of which on Tytania’s eyelids will make her fall in love with the first creature she sees upon waking. He will steal the boy while she is under the spell. Lysander and Hermia meet near Athens. They are fleeing from the law which allows Hermia’s father to force her into marriage with Demetrius. They decide to elope and marry in secret and set off into the woods.
Helena has warned Demetrius that his love, Hermia, is leaving Athens. Demetrius chases after her, pursued by Helena, who is hopelessly in love with him. Demetrius scornfully rejects Helena and runs ahead into the forest. Oberon, who has witnessed their argument, orders Puck to seek out Demetrius and place the juice of the magic flower on his eyes so that he will fall in love with Helena. Six artisans have left the city to discuss in secret a play they hope to perform at the wedding of Theseus, Duke of Athens, to Hippolyta, Queen of the Amazons. There is some disagreement over the casting, with Bottom and Flute finally agreeing to play the parts of Pyramus and Thisbe, the star-crossed lovers of the play’s title. Quince, the author and director of the play, hands out the scripts; all agree to learn their parts and meet later that night in the woods to rehearse.
Lysander and Hermia wander, lost, amidst the forest. Exhausted, they lie down to sleep. Puck, mistakenly thinking he has found Demetrius, places the juice of the magic flower on Lysander’s eyes. Demetrius, still pursued by Helena, angrily abandons her to the dangers of the forest at night. Alone and in despair, she sees the sleeping Lysander and awakens him. Under the effect of the “love-juice”, he immediately falls in love with her. Furious, she runs off, thinking he is making fun of her. Lysander chases after her. Hermia awakes from a terrible dream to find herself alone.
In the heart of the forest, the fairies help their mistress Tytania to sleep. Oberon steals in to put the love-juice on her eyes:

“Be it ounce, or cat, or bear,
In thy eye that shall appear
When thou wakest, it is thy dear:
Wake when some vile thing is near.”

Act II
The forest, later the same night. Quince and his men meet to rehearse. There are several problems raised by the script, to all of which Bottom finds a solution. Rehearsals eventually begin. Puck, seeing the actors at work, decides to amuse himself by turning Bottom into an ass. At the sight of this strange transformation, the others run off, terrified.
Bottom, left alone, sings out loud to keep his courage up. Bottom’s singing awakens Tytania, who immediately falls in love with him. With the help of the fairies, she manages to coax him to bed. Oberon is delighted to find Tytania in love with an ass, but he is less pleased to see Hermia still being pursued by Demetrius. And the arrival of Lysander in pursuit of Helena makes it clear that Puck has put the love-juice on the eyes of the wrong youth.
Demetrius, rejected by Hermia, falls asleep, exhausted, and Oberon places the juice on his eyes. Helena returns, still harassed by Lysander’s protestations of love. Demetrius wakes, sees Helena and falls in love with her. This merely confirms Helena’s belief that the men have planned this mockery of love – a belief which is compounded when Hermia arrives to be met by Lysander’s instant rejection. Oberon and Puck witness the furious quarrel which erupts between the four mortals.
Oberon is enraged at Puck’s mistake and gives him a herb that will act as an antidote for Lysander. By imitating the men’s voices, Puck keeps the lovers apart until they each fall asleep. He then places the herb on Lysander’s eyes.

Act III
The forest, shortly before dawn. Oberon releases Tytania from the spell. She awakens to see her beloved Oberon and is appalled that she could have been in love with an ass. Daybreak wakes the four lovers. Demetrius is still in love with Helena, and Lysander is once again in love with Hermia. Bottom, restored to human shape, awakens from the most peculiar dream that he was transformed into an ass. He returns to the city while his friends search for him in the woods. They have just given up on finding him when he returns with the news that their play has been chosen to be performed at Theseus’ wedding.
Back in Athens, the lovers have come to beg Theseus’ forgiveness for their disobedience to Athenian law. Theseus decides that the two couples shall be married at the same time as he and Hippolyta.
After Quince and his players have given their performance of Pyramus and Thisbe, the three couples retire to bed. Oberon, Tytania and the fairies arrive to bless the sleeping household.