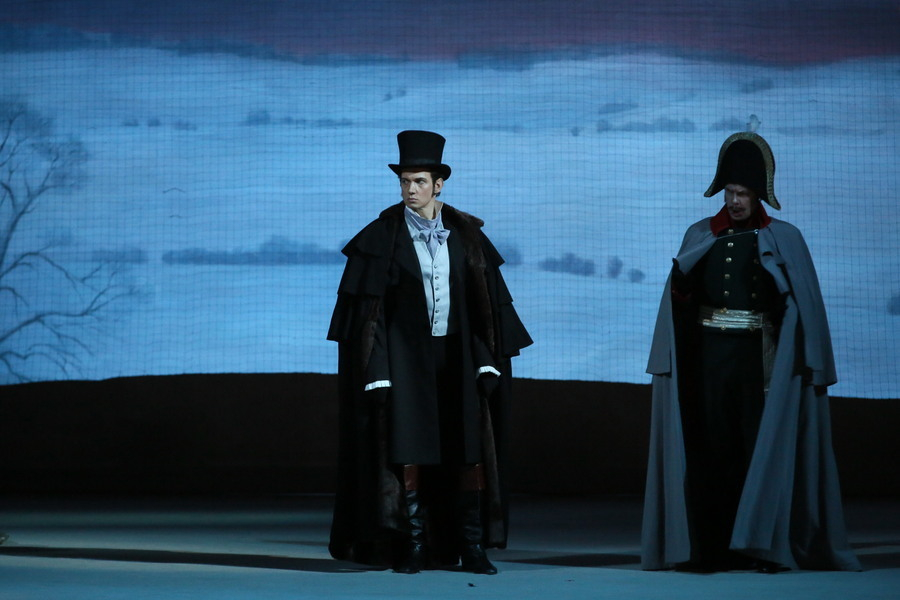 The garden on the Larins’ estate. In the distance, Tatiana and Olga can be heard singing. Listening to them, Mrs Larina and Filippievna the nanny recall their own younger days. Visitors appear unexpectedly: Vladimir Lensky, the Larins’ neighbour and Olga’s fiancé, has brought with him his friend Onegin – a young man recently come down to the country from the capital. While Lensky declares his love to Olga, the new visitor chats with Tatiana. The nanny notes how excited Tatiana is at the meeting.

Tatiana’s bedroom. Tatiana cannot sleep. Filippievna tries to dispel her anxiety with the tale of her own maidenly status. Once alone, Tatiana writes a letter to Onegin. With the arrival of dawn, she asks the nanny to deliver the letter.

The Larins’ garden. Tatiana anxiously awaits a reply. Eugene appears – he is touched by her declaration but is unable to return her love.

The Larins’ house. A ball in honour of Tatiana’s name day. Lensky has convinced his friend to visit the Larins, but the party and the guests serve to irritate Onegin. In revenge, he begins to play court to Olga. The readiness with which the young woman accepts his attentions drives Lensky to despair. He starts a quarrel with Onegin and challenges him to a duel.

An abandoned mill. Lensky and his second await the arrival of Onegin. Lensky mournfully and nostalgically contemplates the former “golden days” of his youth. At last the rival comes. The former friends are willing to forget any offence caused, but ideals of honour gain the upper hand. A shot rings out and Lensky drops down dead.

A room in a luxurious mansion in St Petersburg. Following a lengthy absence, Onegin returns to live in the capital. He finds Tatiana a married woman, now at the centre of attention having taken her place in high society. Her husband Prince Gremin speaks to Onegin of his happiness. The transformation of the young woman he knew awakens feelings of love in Onegin’s heart.

The drawing-room in Gremin’s house. Weeping, Tatiana reads Onegin’s letter. Suddenly he himself appears. With passionate prayer, Onegin succeeds in extracting a confession that she still loves him. But Tatiana’s decision is resolute: she will remain faithful to her husband.


Pushkin’s Eugene Onegin, as is well known, is not a poem but a novel in verse. Tchaikovsky, too, gave his Onegin an unusual genre definition: not an “opera” but “lyrical scenes”. From an “encyclopaedia of Russian life” the composer selected the principal line of the plot, the one that was closest to himself as a lyrical artist. Though naming only one character in the title, Tchaikovsky subsequently went on to reveal the souls of three people to the audience: Tatiana (Act I), Lensky (Act II) and Onegin (Act III). In all three characters Tchaikovsky saw something of a reflection of his own self, and even Tatiana’s famous letter scene rhymes with an episode lifted from the life of the composer, who wrote the scene plan of the emergent opera in one night. The “lyrical scenes” were completed in 1878, having been begun in 1877, and one year earlier still Tchaikovsky had attended the opening of the Wagnerian theatre in Bayreuth. Regardless of all the anti-Wagnerian instincts of the Russian composer, his attention was also drawn to the inner “I”, the events played out in the drama being reduced to a minimum. Each elegiac breath taken by the orchestra, beginning with “Tatiana’s sequence” in the introduction, conveys the most incredibly subtle movements of the human soul. Following in Wagner’s footsteps, Tchaikovsky made use of leitmotifs – these being first and foremost neither heroes nor objects but rather emotions. And this is why Tatiana’s music sounds so natural both in the scenes with Lensky, and in the scenes with Onegin who has been transformed by love. The music historian Boris Asafiev appropriately called Eugene Onegin a “musical poem”. Tchaikovsky’s most famous opera, this is a “symphonic poem” of seven tableaux or chapters, a poem about hopes and their destruction, about love, about a happiness which “had been so possible, so close”. Eugene Onegin, performed at the historic Mariinsky Theatre, is a perfect example of the cultivation of musical and theatrical “soil” and was, in its day, awarded the State Prize of the USSR. The premiere of the production took place in 1982 at the theatre then still known as the Kirov. At the time the post of Artistic Director and Principal Conductor of the theatre was held by Yuri Temirkanov. Onegin was his child, moreover not merely with regard to the music: here the conductor also made his mark as a stage director. Being both the conductor and director of a production at the same time is a complex and demanding task, because “you have to consider what is happening in the orchestra, as well as building the production musically; like it or not, you are on the stage all the time, because each movement is something that you yourself have experienced” (from an interview with Yuri Temirkanov). The first Lensky of the legendary production, Yuri Marusin, recalled that the conductor-director personally showed the singers the plastique he desired, the gestures and the poses, creating an unbroken link between the audible and the visible, between the orchestra pit and the stage. The production was designed by Igor Ivanov, who in 1981 held the post of the theatre’s Principal Designer. Striving for historic realism, the set designer reproduced in detail Russian life in the first quarter of the 19th century. Anyone who has been to places connected with Pushkin in the Pskov Region will easily recognise the manor house with the semi-circular window and portico, as well as Onegin’s bench. The interior of Tatiana’s room is a quotation from Roman Tikhomirov’s opera film (1958). The “rich mansion in St Petersburg” in Act III recalls to mind the severe magnificence of the White Columned Hall in the Noble Assembly. And Ivanov’s set designs are far from being mere beautiful illustrations. In the final scene of Tatiana and Onegin’s explanations, behind these characters there is an immense longcase clock, indicating their principal foe – time which, once lost, knows no mercy.
Natural and harmonious in all its component parts, Temirkanov’s ground-breaking Eugene Onegin not only appeals to the Russian “cultural code” – it is such masterpieces as this that shape it. Khristina Batyushina