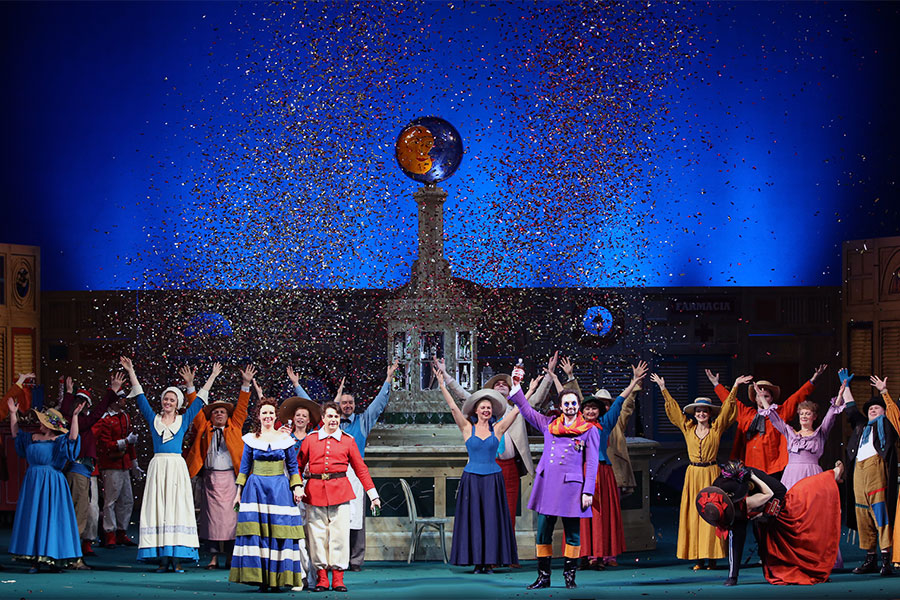 Act I
The poor and bashful Nemorino is hopelessly in love with the rich and beautiful Adina. He hears her reading aloud the legend of Tristan, who has won the heart of Queen Isolde using a magic love potion. While Nemorino is dreaming about this magic potion, soldiers under the command of Sergeant Belcore enter the village. Adina immediately attracts the brave warrior's attention. He does not plan to hang around long: let Adina name the wedding day immediately! And yet the girl dislikes the sergeant's self-assurance. She cunningly and coquettishly spurns the advances of her unlucky admirer. Seizing the moment, once everyone has left, the unhappy Nemorino hastens to declare his love for Adina, but the mischievous imp tells him that faithful and constant love is not for her.

The itinerant medicine man Dulcamara, a charlatan and scoundrel, arrives in the village. The sales of "miracle-balsams" are well underway. The unfortunate Nemorino, too, turns to him for help: "Do you not have Isolde's love potion?" Pleased to be addressing such a simple fellow, Dulcamara gives the youth a bottle of everyday Bordeaux and promises that the "elixir" will act within a day, calculating the amount of time he needs to get far away from the place. Nemorino's impatience is so great that he immediately drains the bottle of its "elixir of love". He believes that the potion is having an immediate effect. Confident that Adina will soon fall in love with him, Nemorino feigns coldness. Such novel and unexpected behaviour from her admirer wounds the girl's pride. The arrival of the sergeant gives her a hint as to how she can repay Nemorino. She promises her hand to Belcore. Suddenly the sergeant receives the order to abandon the village. Adina agrees to hold the wedding that very day. Nemorino's head is instantly cleared of tipsiness. Understanding that he is losing his love forever, the luckless youth begs her to postpone the wedding at least until the next day.

Act II
Preparations for the wedding are underway, and the guests are drinking and having fun. Dulcamara asks Adina to sing a new song for two voices with him – a barcarolle about a senator and a boatwoman. Reeling at the news that the notary has appeared, Nemorino begs the doctor to save him – to make the people fall in love with him before the next day arrives. Naturally, the charlatan recommends that the youth purchase another bottle of the elixir – to increase the potency of the drink. In order to earn money and acquire his next dose of the potion, Nemorino becomes a recruit in Belcore's regiment. Holding the precious coins in his hands, he hastens off to find Dulcamara.

News unexpectedly flies around the village: Nemorino's uncle has died in the city, leaving him his entire fortune. Only Nemorino, emboldened by the second portion of the doctor's "elixir of love", is unaware of these events. Dulcamara guarantees that this time the drug will definitely work, and the lad is filled with the most glittering expectations. On his way, indeed, the first girl to meet him – Giannetta – pays heightened attention to him because now he is a rich single man. Dulcamara is amazed. It would appear that the contents of the bottle truly are magic. Adina witnesses Nemorino's unprecedented success with the ladies and learns that he has joined up to be a soldier to win her heart. Dulcamara, seeing Adina's jealousy, offers her his elixir of love. But the beauty has no need of the sorcerer's services, she having an elixir no less powrful than his: "The recipe is written on my face, the potion in these eyes".

Nemorino's drunkenness has passed, and again he laments Adina. The tear of offence in her eyes tells him that he, too, is loved. At the same time, Adina purchases the recruit list from Belcore. She hands the contract to Nemorino, persuading him not to leave his home village. The youth is disappointed: he had expected a declaration of love. "As no-one loves me, I'd rather die a soldier!" he exclaims. The perturbed Adina at last opens her heart and falls into the arms of her beloved. Belcore is by no means dejected: there are many more women on the face of the earth. Dulcamara is inspired by the success of his curative drink.


Donizetti’s L’elisir d’amore (1832) bears the description of a melodramma giocoso.
These words brilliantly convey the spirit of the work. The orchestral prelude depicts a pastoral idyll which is destroyed by the sudden arrival of some unseen and fateful power – the composer’s joke, of course. In L’elisir d’amore everyone is happy from start to finish with the exception of the tenor, but then tenors are supposed to suffer. The more so, as it will all soon come to an end. In a true idyll even a rich old uncle will die on time in order to make his nephew a rich young groom. And in the finale the sorcerer Dulcamara, on witnessing the general and universal happiness, in his own eyes becomes the noblest of men. Village naivety comprises some of the opera’s charm. Only the simple Nemorino could so believe in the power of his magic potion, and his love and faith transform everyday Bordeaux into a medical elixir.
L’elisir d’amore is a masterpiece that contains everything it should and in which there is nothing superfluous. There are just five characters, the choruses are laconic (as the peasants basically actively and readily assent to the protagonists) and there are recitatives to piano accompaniment in the old style, though there are very few of these rudiments left.
The plot unfolds at speed. A platoon of soldiers arrives in a sleepy village, followed by Dulcamara, a purveyor of miraculous elixirs (it would appear he is not just a doctor but also something of a sorcerer as his arrival is heralded by fantastical chords). Perhaps Donizetti was taking a risk in beginning the opera with four (!) cavatinas (opening arias). One after another all four protagonists are presented to the audience – Nemorino, Adina, Belcore and Dulcamara – but what occurs in no way resembles a dazzling “concert in costumes”. Each cavatina grows into an ensemble with chorus, augmented by stage effects, and in L’elisir Donizetti’s melodious inspiration swells so generously, the romantic bel canto so passionately and the coloratura so magnificent and ecstatic that the flow of the music blends with the flow of the plot and is so gripping that you can forget time itself. Then the opera takes on an uninterrupted crescendo: a duet, a terzetto and then a quartet with chorus…
Written with an easy heart, L’elisir d’amore received a warm welcome at the premiere and quickly entered the repertoires of many theatres. Today L’elisir retains its former popularity, possibly because the romantic composers did not bequeath us many comedies. Anna Bulycheva

Performance running time: 2 hours 30 minutes
There will be one interval

L'elisir d'amore
on the playbill