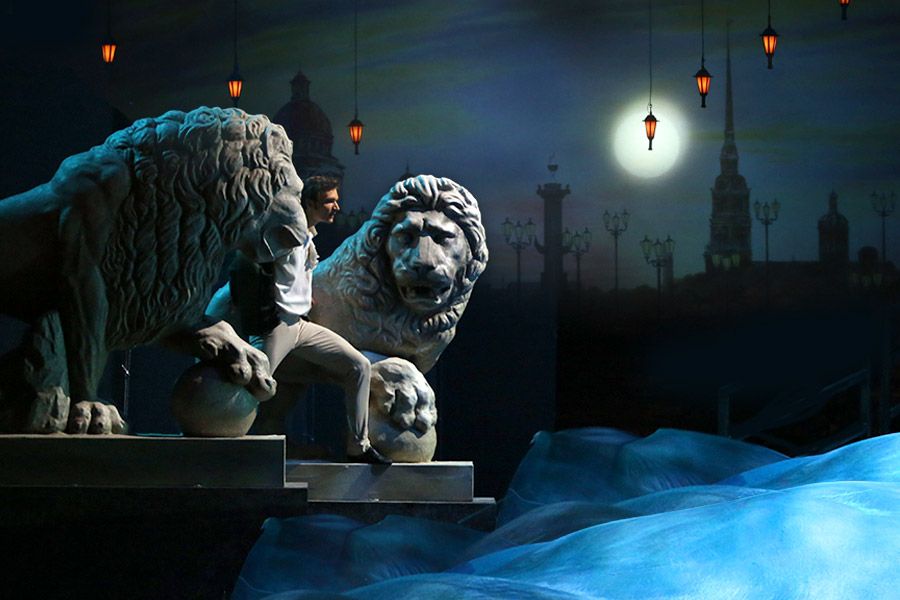 Prologue
A bare shore. Peter I is immersed in thought about the future of Russia and the construction of his new city on the River Neva.

Act I
St Petersburg, 1824. There is a popular fete on Senate Square near the monument to Peter I. Wandering artistes are giving a performance. The dance of Columbine and Harlequin is interrupted by the sounds of a military orchestra – a regiment marches across the square. The lovers Yevgeny and Parasha meet at the monument. In the growing gloom the monument to Peter the Great appears triumphantly threatening. Yevgeny delightedly tells Parasha about Peter...

The port in St Petersburg. At the wharves the construction of a ship is complete and preparations are underway for its grand launch. Founder of the Russian fleet Peter I proudly examines the new ship and gives the final instructions. Visitors from overseas arrive. Everything is ready for the festivities. Peter chops the rope and the ship slowly moves down the slips.
The visitors pass along an alley in the Summer Garden towards Peter I’s palace for a ball. Peter introduces his god-son Ibrahim who has returned from France to a dazzling beauty who has been acclaimed by the assembly as the “queen of the ball”. The Emperor opens up a globe gifted by Dutch sailors that contains a model of the new ship. At the height of the general dancing, Menshikov organises a game – whoever is left without a woman must empty a “grand eagle cup”. The guests depart long after midnight.
Left alone, Peter dreams of what the city he has founded at the mouth of the River Neva will be like.

Act II
Autumn 1824. Parasha is living with her mother in a small house on the shore of Vasilievsky Island. In the garden in the shade of the willow tree she and her friends are performing a round dance. Parasha’s mother demonstrates how they used to dance in the old days. The girls tell each others’ fortunes. Yevgeny, who is hiding behind the willow tree, admires their dancing.
Yevgeny and Parasha dream of quiet domestic bliss. The girls give the lovers wedding garlands made from autumn leaves.
Suddenly the wind rises and dark clouds fill the sky – bad weather is approaching. Yevgeny bids farewell to Parasha and hurries home before the bridges across the Neva are washed away.
Yevgeny’s room. Yevgeny recalls his meeting with his beloved; all his thoughts are of the wedding.
Outside the weather is dreadful and the flood is ever nearer. Worried about Parasha, whose house is on the very banks of the gulf, Yevgeny hastens off to his beloved.

Act III
On the shore a crowd of frightened citizens observes how quickly the waters of the Neva are rising. The river has burst its banks. Yevgeny despairs – his path to Parasha is cut off. Climbing onto a stone lion, with horror he views the scene of the flood. Mad with longing and fear, Yevgeny jumps into the water in the hope of swimming through the seething Neva to Parasha’s house.
The storm has passed. Where yesterday Parasha lived, today the old house, the gate and the people have all gone – only the broken willow tree stands, drooping. Grief-stricken, Yevgeny imagines he can see his beloved once more. Yevgeny loses his reason.

Boys are making fun of the insane Yevgeny. On the site of his recent rendezvous with Parasha, Yevgeny looks with loathing at the Bronze Horseman, believing that Peter, who founded the city on the Neva, is the cause of his grief. Behind him Yevgeny hears the clatter of hooves from the horseman’s steed and enters a fatal encounter with him. Too weak to fight, Yevgeny drops down dead.

Epilogue
The city founded by Peter has been transformed and its residents, as before, dream of love and happiness...

The revival of forgotten but once-loved productions has been a trend of the Mariinsky Theatre over the last seventeen years. The appearance The Bronze Horseman is a continuation of this course. But if previously old ballets were revived and scrupulously reconstructed from archive materials or from personal memories of performers who danced in them, then here we have an antique adapted to the modern day. In the new Bronze Horseman we still have the choreographic structure of Rostislav Zakharov’s production, created in 1949: those who appeared in the ballet in the 1980s have demonstrated their roles to today’s performers. And it was Yuri Smekalov who has brought the dance modesty of that drama-ballet to match contemporary interests of today’s performers and the habits of today’s audiences – there are more leaps and complex pirouettes in the choreographic text. “In my production I am trying to retain Zakharov’s choreographic idea, but I want to show it in a different light so that the ballet has meaning for the audience today”, Yuri Smekalov said. If the dances have been only partially revived then the stage décor of the Stalinist era has been fully rejected, and much of what mid-20th century audiences contemplated, submitting to the pathétique of Glière’s music, has today been executed using computer graphics. The patina of time an antique souvenir has been removed, giving The Bronze Horseman a modern gloss.
Olga Makarova