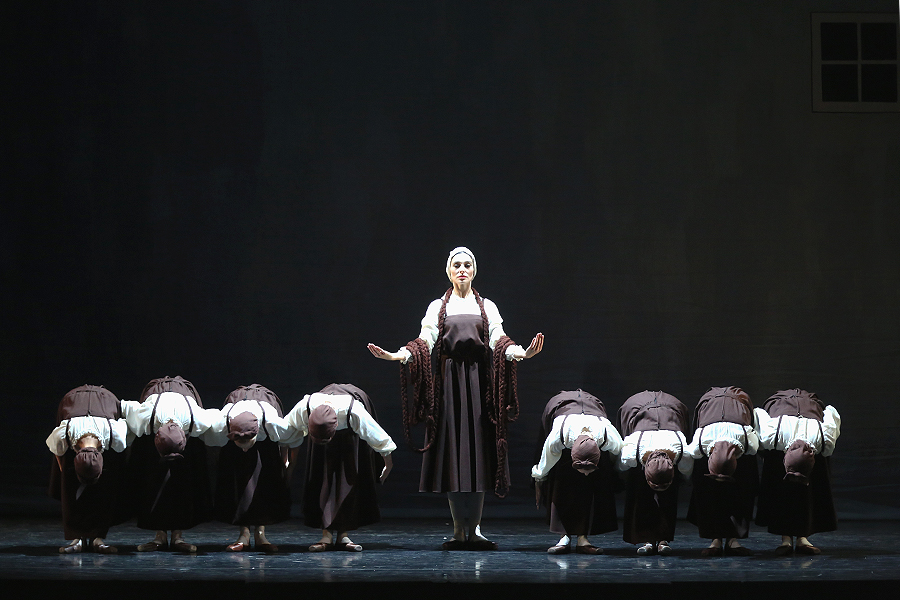 For over ten years Stravinsky was consumed with the idea of Les Noces, a choral work as "a sequence of typical wedding episodes, a reproduction from fragments typical of this ceremony of conversations." The composer sought out the musical form, the orchestral ensemble and the traditional folkloric text, which would represent a genuine Russian rite, and not describe a wedding plot in an a la russe stylisation.
Stravinsky's proposed "idea of ritual and impersonal action" found its dazzling embodiment in the choreography of Bronislava Nijinska. It was to her, a classical dancer who had once been a worthy partner and co-conspirator of her brother Vaslav, and who in the post-revolutionary years had dedicated herself to seeking out a new movement, that Diaghilev entrusted the staging of this work that was so precious to him. And, as usual, he had not miscalculated. The Paris premiere of Les Noces in 1923 emerged as a forum, and it revealed to the world a choreographer for whom this production alone would have been enough to ensure entry to the pantheon of great 20th century choreographers.
Responding to the nuances of the capricious rhythms and metrics of the music, in Les Noces the movement spoke and lived, needing no pantomime, stage props and realistic costumes. A dance of the ensemble. In the choreographer's mind, each dancer was to blend with the whole through the movement. The Bride and the Groom are mere parts of the combined ensemble, which conveyed the dramatic character of fate and the perpetuity of the protagonists in an old-style peasant wedding: just like in the maiden's braids, which before the wedding are unplaited into two parts and redressed in a woman's hairstyle, the maidens leaned their heads on each other's shoulders, bowing in ritual lamentation, leaned their heads as on an executioner's block. The extreme minimalism in subordination to the dance in the rather cool geometry of the choreographic drawing, in the insistent repetition of the monotonous movements, in the simplicity of the bicoloured brown and white costumes conceived by Natalia Goncharova and in the intentional impassivity of the performers – everything in the ballet was of its time in the context of the avant-garde of the 1920s. And in the sharp, contemporary nature of the ballet the primordial Russian nature of Les Noces was not lost – not cheaply popular and souvenir-like, but conditionally ritualistic, where the plot unfolds as if in a clockwork mechanism: the figures of the dancers intermingle monotonously, literally submitting to the will of one master, the ancient and immutable ritual.
Olga Makarova