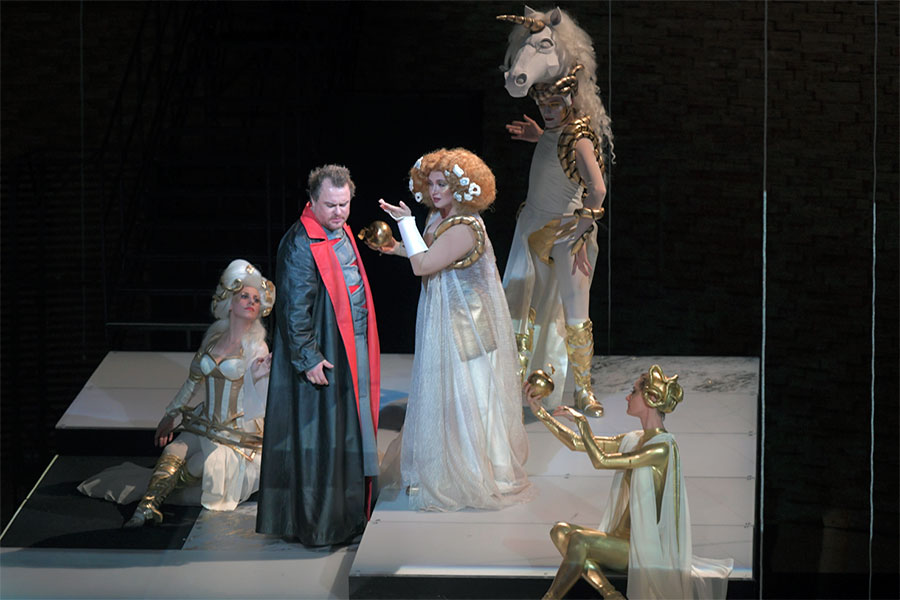 Music by Richard Wagner
Libretto by the composer

Inside the Hörselberg, where Venus' kingdom is to be found. Tannhäuser the knight and singer once found his way inside and became the beloved of the goddess of love herself. His life was filled with enjoyment. Having had his fill of all that, the knight has resolved to leave Venus and return to people. He is stifled in the rosy intoxication of Venus' kingdom, and once again he wishes to breathe fresh forest air and hear birds singing and bells ringing. In vain, the insulted goddess tries to restrain Tannhäuser: neither tenderness nor prayers nor curses can stop him. With the name of the Virgin Mary on his lips, the minnesinger leaves Venus' mansion and finds himself in the flowering valley near Wartburg Castle. With fondness he hears the song of a shepherd. A procession of pilgrims passes by, heading for Rome. In the distance the sounds of hunters' horns can be made out. The landgrave of Thuringia appears in the accompaniment of knights. There was a time when the haughty Tannhäuser left them. Now one of the knights, Tannhäuser's old friend Wolfram von Eschenbach, asks him to return to Wartburg and participate in a singing contest. Tannhäuser initially refuses, but on discovering that the landgrave's niece Elisabeth misses him he joins the knights.

In Wartburg, in the hall where the minnesinger knights are to compete in their art, Elisabeth's joyous call greets Tannhäuser. He arrives, accompanied by Wolfram. Elisabeth tells Tannhäuser about a new and unknown feeling that has come over her. The minnesinger rejoices: it is love! In delight, the lovers sing a hymn to the loftiest feeling of love. Wolfram is saddened, as his hopes for Elisabeth's heart have been shot down. The landgrave opens the competition and declares the theme of the contest: it is the essence of love. Wolfram sings the praises of pure loe, comparing it to a stream. Tannhäuser, who has only just returned from Venus' grotto, protests against his friend. The other knights – Walther von der Vogelweide and Biterolf – side with Wolfram. Incensed, Tannhäuser declares for all to hear that he has lived in Venus' grotto, and he sings of heartfelt love. All are perturbed. The women leave the hall and the knights seize their arms. Elisabeth saves the minnesinger from death; she forbids the knights to administer any punishment. The landgrave orders Tannhäuser to join the pilgrims and depart to see the Pope in order for his sins to be forgiven.

In the valley below Wartburg Elisabeth awaits his return. Wolfram looks at her in compassion. At last the pilgrims who have been in Rome appear, but Tannhäuser is not among them. Elisabeth calls out to the Virgin Mary for percy. She is prepared to die in order to save her beloved. Left alone, Wolfram greets the evening star. Tannhäuser appears. He is in despair: the Pope cursed the sinner, saying that his salvation is just as impossible as it is impossible for the Pope's crozier to be covered in green shoots. Spurned by everyone, the minnesinger hopes to find Venus once again, but the godess of love's charms no longer hold any power over him: Elisabeth's angelic soul has prayed for and been granted forgiveness for her beloved. By Elisabeth's grave, Tannhäuser dies. The pilgrims tell of a miracle that occurred in Rome: the Pope's crozier has blossomed.