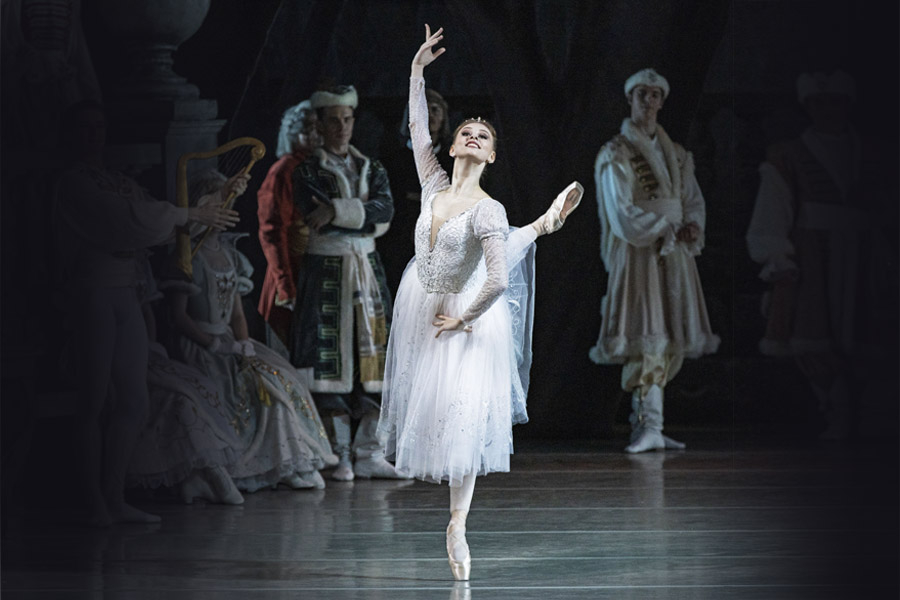 The Fountain of Bakhchisarai

Music by Boris Asafiev
Libretto by Nikolai Volkov based on the poem by Alexander Pushkin
Choreography by Rostislav Zakharov (1934)
Set and costume design: Valentina Khodasevich

Prologue
Khan Ghirei is lost in reverie by the “Fountain of Tears”, built in memory of Maria.

Act I
Birthday celebrations for Maria, the daughter of a noble Polish lord, are underway at the old castle. The castle is ablaze with lights and music can be heard. Maria and her bridegroom Vaslav appear in the dusky park. They are overjoyed. A Tatar scout slinks along the path, unseen. The castle doors swing wide open and the guests come down into the park to the music of a solemn polonaise. The host and his beautiful daughter lead the dancing.
The polonaise gives way to a mazurka and a cracovienne. Suddenly, the wounded chief of the guard enters, bearing news of a Tatar attack. Prince Adam calls the men to arms. The women hide themselves in the castle. The Poles get ready to beat off the attack.
The castle is aflame. Locked in mortal combat, the defenders of the castle perish. Maria and Vaslav are running through the fire and chaos of the bloody battle, trying to escape. Their flight is hindered, however, by Khan Ghirei. Vaslav attacks him but is stabbed with the Khan’s dagger and falls dead. The Khan approaches the defenceless girl, tears the veil from her face and is struck motionless by her beauty.

Act II
Khan Ghirei’s harem in the palace of Bakhchisarai. Ghirei’s favourite wife Zarema, “the star of love”, is amongst the concubines.
Sounds of bellicose music can be heard. The wives and concubines get ready to welcome Khan Ghirei.
The Tatars return from the war, rich in plunder. The captive Maria is carefully carried in. Ghirei enters the harem. He looks preoccupied and thoughtful. Zarema tries to divert him, but in vain. Overwhelmed with his love for Maria, he takes no notice of Zarema. Zarema realises that his love for her has gone.
The concubines try to cheer up their ruler. Zarema hopes to regain his favour, but all is in vain. He pushes her aside and leaves. Zarema collapses.

Act III
A luxurious bed-chamber. Here, guarded by an old woman, the beautiful Maria languishes in captivity, a harp the only reminder of her former life, freedom and bygone happiness. Her reverie is interrupted by Ghirei. He implores her to accept his love and his wealth, but Maria is only afraid and repelled by Ghirei, who killed her beloved, her friends and her family. He humbly leaves the chamber.
Late at night, Zarema enters the bed-chamber. She tells Maria of her passionate love for Ghirei, demanding that Maria alienate Ghirei from herself, and pleads to restore his love for her. Maria is unable to understand Zarema’s passionate speech and is frightened by it.
Zarema sees Ghirei’s scull-cap on the floor. Seized with jealousy, Zarema rushes to Maria with a dagger; unafraid, Maria is prepared to die. Ghirei rushes in. He tries to stop Zarema but fails. Zarema kills Maria.

Act IV
The courtyard of Ghirei’s palace. Ghirei is surrounded by servile nomads, warriors and slaves.
Nothing, neither the rich plunder from a new foray, nor new and beautiful concubines, gladdens or excites the Khan.
Executioners lead Zarema to her death. Ghirei orders them to hurl her down from the top of a high cliff.
Ghirei’s favourite military chief Nurali tries to divert his sovereign from his sombre thoughts, but the warrior-like dances provide no relief. Ghirei sends everyone away.

Epilogue
Ghirei is sitting by the “Fountain of Tears”.
A train of thoughts passes through his mind, reviving the image of the beautiful Maria.


The "star hour" of the drama ballet was heralded by the appearance in 1934 at the Leningrad Theatre, then not yet known as the Kirov, of the ballet The Fountain of Bakhchisarai. In it the desire to combine choreography with the themes of high literature and the defence of new Soviet art for the sake of realisticity crystalised the new direction of ballet's development.
The Fountain of Bakhchisarai emerged in an atmosphere of creative discussions of the progressive cultural elite of Leningrad: Professor Boris Asafiev of the conservatoire, an authoratitave composer and music historian, stage director Sergei Radlov who defined the theatre's artistic policy at the time, conductor Yevgeny Mravinsky, designer Valentina Khodasevich, librettist Niklai Volkov and the critic Ivan Sollertinsky. The twenty-seven-year-old choreographer Rostislav Zakharov found himself at the epicentre of artistic and theatre life. He, as a debutant in grand ballet and as a graduate of the stage-directing faculty of the Leningrad Institute of Stage Arts who had recommended himself with his productions of dances in operas and plastique in productions at Radlov's Youth Theatre, was invited to stage the choreography of the new ballet.
Inspired by the recently-published Letters about Dance by Noverre with an introductory article by Sollertinsky about the dramatic effect of dance, in his new ballet the young choreographer introduced well-learned lessons from stage drama to the ballet stage. The dance at times remained on the periphery of the choreographer's attention, the ballet was born not from the dance but from the plot, the cleverly enacted mise-en-scènes. In reaction to the stage director's preferences there was also the inclusion of the acting cast. The expressiveness of Galina Ulanova and Konstantin Sergeyev, who were allocated the lead roles, was to prove an essential element of the production's success. The once-and-forever chosen artistic path of The Fountain of Bakhchisarai and the production of ballet plays brought great acclaim to Zakharov. The literary centrism was to become the "main song" of Zakharov and the mainstream of Soviet ballet for the next twenty years. The poetic nature of ballet, oriented exclusively towards truly the emotional (real or unreal) were interminged with everyday prosaic elements. What remains unsaid in Pushkin's poetry demanded logical explanations, and in The Fountain of Bakhchisarai a new character appeared - Vaslav, Maria's beloved, was included in the plot in order to underscore the difference between the world in which the Polish princess Maria had a happy life and the world of her Tatar captivity. Zakharov taught his dancers to work as actors on their roles, to prepare them for that previously unknown "table-chat" with the director to deal with the characters and the conflicts. And it is not by chance that of performers of the era of drama ballet it was said that "the ballerina is an actress and the danseur an actor." Embodying on the stage the characters of Pushkin's heroes and thus laying the foundations of the traditions of acting expressiveness in Soviet ballet became the mission of the generation of the 1930s-1940s. And Zakharov and his comrades-in-arms who reigned on the Soviet stage throughout the period of so-called drama ballet taught the audiences to ask the question "What are they dancing about". Wishing to be understood, the choreographer forced audiences to think and, at times, thus to forget the eloquence of the dance unburdened by a lexical word-for-word through dance. Olga Makarova

The Fountain of Bakhchisarai
on the playbill