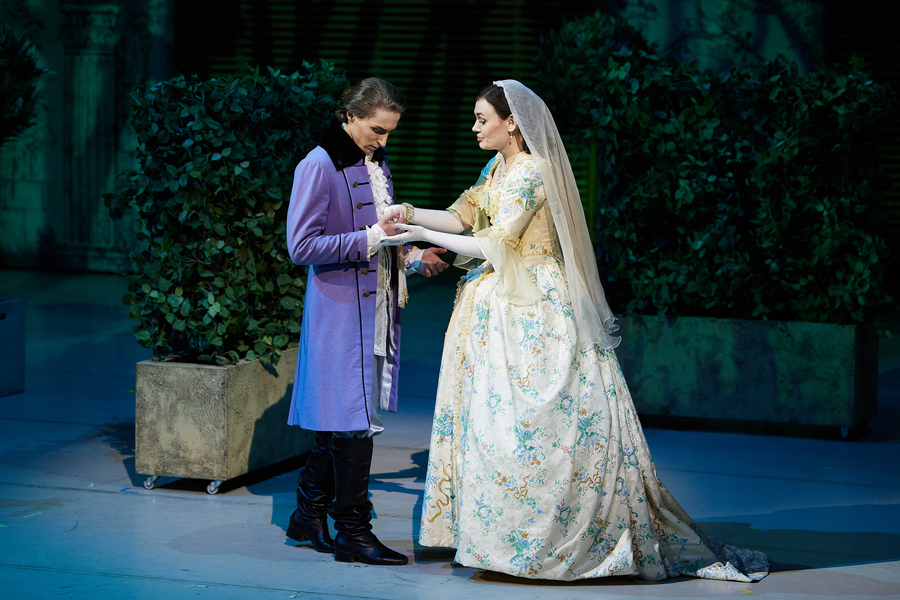 The action takes place in Salerno in the 18th century.
Baron Don Magnifico has two daughters – Tisbe and Clorinda – and a stepdaughter called Angelina who is known by the nickname of Cinderella. Cinderella’s stepfather has commandeered her inheritance, and in his household she is treated dismissively as if she were a servant.

Act I
Morning in the house of Don Magnifico. While Clorinda and Tisbe are parading themselves in front of the mirror, admiring their own elegant and beautiful clothes, Cinderella, as always, undertakes the menial household tasks, singing a sad song. A knocking at the door is heard. Alidoro, Prince Ramiro’s mentor, has arrived. Disguised as a beggar, he is on a mission to discover a bride worthy of his charge. The beggar’s request for charity is answered with rudeness by Clorinda and Tisbe. Cinderella, however, offers the weary traveller bread and coffee. Alidoro is sincerely touched by the girl’s kindness.
Heralds suddenly appear, announcing that Prince Ramiro intends to marry and will soon be coming here in order to invite Don Magnifico and his daughters to a ball where he will select his future wife. Clorinda and Tisbe are both excited and delighted, each of them planning to win the Prince’s heart. Don Magnifico himself is also unusually pleased: if Prince Ramiro chooses one of his daughters then he will be able to right his shaky finances in addition to becoming a worthy nobleman. Unimaginable chaos erupts in the house – Clorinda and Tisbe are preparing themselves for the ball.
Meanwhile, Ramiro, having learned from the faithful Alidoro that Don Magnifico’s stepdaughter is a sweet and kind girl, arrives at the Baron’s house, having first changed into the clothes of his valet Dandini. He resolves to be convinced of everything himself and, at the same time, to test Cinderella’s feelings. There is an explanation between Cinderella and the Prince. Don Ramiro, hearing the girl’s woeful tale, is subdued by her charm, kindness and noble qualities.
Following in the footsteps of the disguised Prince Ramiro, Dandini in elegant finery appears on the doorstep together with his retinue, pretending to be the Prince. In mock admiration, overflowing with compliments, he invites Don Magnifico and his daughters to the ball tonight. Cinderella, too, truly wishes to attend the ball and asks her stepfather to take her with them. But Don Magnifico is impervious. He declares in the presence of all that Cinderella is not his daughter, and that she is simply a mere servant – moreover one with no family. Cinderella demands her rights. The enraged Don Magnifico then begins to threaten and, simultaneously, thinks up a “touching” story of the untimely end of the third daughter.
When all depart for the ball, Alidoro, comforting the despairing Cinderella, promises to take her to the Prince’s palace and also to provide her with a dress and jewels to wear.

Prince Ramiro’s palace. Dandini, still dressed in the Prince’s clothes, informs his master in his richly-decorated study of the viciousness, hopeless stupidity and vacuousness of both of Don Magnifico’s daughters and suggests cancelling his resolution to choose a bride. Meanwhile, the competing sisters arrive. Making every possible effort, they try to make the pretend Prince like them, flirting and being playful with him. Dandini logically remarks, however, that he cannot be a husband to both sisters at the same time, and offers a choice: if one of them will step back then for the other he will find a worthy replacement – Prince Ramiro’s servant. The proposal is met with resentment by both sisters.
Meanwhile, the ball is at its height. Unexpectedly, the arrival of an unknown lady is announced, and she is brought into the ballroom by Alidoro. It is Cinderella, having been transformed. Her striking dress and jewels have rendered her unrecognisable and irresistibly beautiful. This lady is instantly surrounded by a crowd of male admirers. The beauty of this lady, somehow very similar to Cinderella, rouses Clorinda and Tisbe’s jealousy and Don Magnifico’s wrath. And yet the sisters do not despair, being convinced as they are of their victory; the “Prince” (Dandini in disguise), though having noticed the mysterious stranger, has nonetheless not for a second ceased lavishing compliments on the beauty of Clorinda and Tisbe. The guests are invited to the table. Following the dinner there is to be a play and then dancing and the choice of a bride.

Act II
The “Prince’s servant” appears in the drawing room – it is Ramiro in disguise. He is more than a little alarmed: it seems that Dandini, really the servant, is also in love with Cinderella. Seeing Dandini and Cinderella come closer, the Prince hides and observes them in secret.
Dandini declares his love to Cinderella. Cinderella does not know that Dandini is not the Prince but merely a servant in disguise. And yet she nevertheless rejects his advances, as her heart belongs to someone else: her beloved is the Prince’s modest servant. Prince Ramiro, who has heard all, is filled with jubilation. Now Cinderella intends to test the feelings of her beloved. She gives him a bracelet: if Ramiro loves her then using this bracelet he will be able to find Cinderella. Explaining not a single thing more, the mysterious stranger leaves the palace.
Prince Ramiro orders everyone to join the search for her. The faithful Alidoro has already come up with a cunning trick, thanks to which there should be a “chance meeting” of the lovers: the Prince’s carriage will fall to pieces right outside Don Magnifico’s house. At the same time Don Magnifico himself, suspecting nothing of what has happened, insistently asks the “Prince” – Dandini – to name his heart’s desire.
In response, Dandini merely laughs, revealing his true face. There is a scandalous scene of explanation. Having at last understood that they have made a fool of him, Don Magnifico is infuriated. Dandini shows the angry Baron the door.
Don Magnifico’s house once again. The angry master and the disappointed daughters are returning home. On seeing Cinderella, sitting as always in a dark corner, they continue their guesses about the mysterious lady who appeared at the Prince’s ball.
A thunderstorm starts. Through the noise of the rain and the thunder pealing a knocking can be heard at the door. Dandini enters the house. Now as the Prince’s servant, he declares that Prince Ramiro’s carriage has had an accident outside the Baron’s house. Following Dandini, Ramiro appears on the doorstep as his own self. Seeing the cherished bracelet on Cinderella’s arm, he declares that she will be his bride. The couple-to-be leaves Don Magnifico’s house.
Clorinda and Tisbe are in despair. Alidoro advises them to ask forgiveness from their stepsister: knowing Cinderella’s kind heart, he is certain that she will forgive them.


Running time 3 hour 10 minutes
The performance has one interval