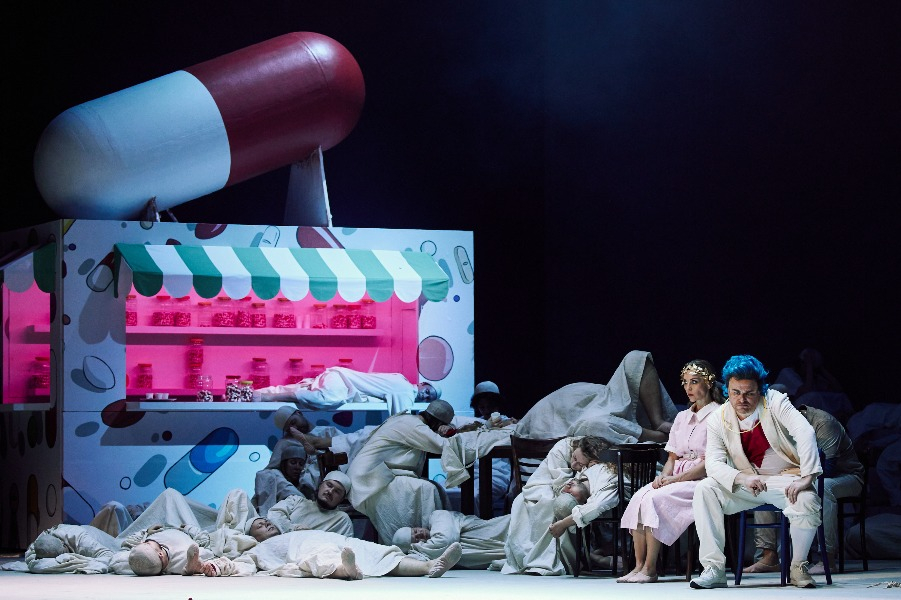 Prologue
A tavern in a German city, not far from the opera house. The spirits of beer and wine eagerly await visitors to the wine-cellar. The muse of Hoffmann the poet appears. She is determined to save him from his succession of disappointments in affairs of the heart: at the theatre, Hoffmann has only just seen his former lover, the opera singer Stella, and she is intent on resuming their romance. To save Hoffmann, the muse adopts the guise of his friend Nicklausse. The councillor Lindorf appears – he is Hoffmann's rival. He intends the poet great harm and seizes a love letter from Stella. Tonight she is to sing the role of Donna Anna in Mozart's opera Don Giovanni and wait for Hoffmann in her rooms after the performance. During the interval the tavern becomes filled with students. They ask Hoffmann to sing them a song about the little Zach, who is referred to as Kleinzach ("Il était une fois à la cour d’Eisenach" ("Once upon a time at the court of Eisenach")). In the middle of the song, Hoffmann unexpectedly succumbs to a reverie about Stella. The soiree becomes increasingly debauched, and Hoffmann has a skirmish with Lindorf. They all begin to talk about love, and the poet offers his drinking companions the story of his own amorous adventures.

Act I
The inventor Spalanzani is admiring his brainchild – the doll Olympia, amazingly similar to a real person. She promises to be highly profitable, and Spalanzani fears that Coppélius, a salesman of medical apparatus, will demand a share of the proceeds as he has manufactured the doll's eyes. Hoffmann, thinking that Olympia is a real girl, has fallen in love with her and, in order to be closer to the object of his desire, has become Spalanzani's apprentice. In vain does Nicklausse attempt to warn Hoffmann: love has made the latter blind. The charlatan trader Coppélius appears; he sells the poet glasses enabling the wearer to see only that which he wishes to see. Afraid that Coppélius will claim a fee for the doll, Spalanzani offers him a bank cheque in payment.
The guests assemble, and the inventor presents Olympia to them; all are enamoured of her beauty, Hoffmann more so than anyone else. Olympia sings some couplets ("Les oiseaux dans la charmille" ("The birds in the arbour")), Spalanzani winding up the mechanism from time to time. The guests leave to dine, and Hoffmann declares his love to Olympia. Coppélius appears once again. He is enraged: the bank cheque given to him is fraudulent. The guests return and the dancing begins. The elated Hoffmann dances with Olympia, but in anger Coppélius smashes the doll. Ridiculed by the assembly, in horror the poet realises his mistake.

Act II
Munich, at the remote house of Crespel the violin-maker and his young daughter Antonia. Antonia loves to sing more than anything else, though Crespel forbids his daughter this activity: singing could cost her her life. Crespel is a widower – his wife, a famous opera singer, died from an illness. This illness – as well as a gift for music – has been inherited by Antonia. Despite being forbidden, the girl sings a romance ("Elle a fui, la tourterelle!" ("She fled, the dove!"). Crespel reproaches her and, having tasked his manservant Frantz with locking all the doors, goes out.
Hoffmann appears – he is in love with Antonia. He is happy: the girl requites his love. The young people sing a favourite song as a duet. They intend to be married, and for the sake of familial happiness Antonia agrees to give up singing. Hearing Crespel's footsteps draw near, Hoffmann hides. Dr Miracle appears – he wishes to see Antonia dead by compelling her to sing. Crespel tries to get rid of the murderous doctor, but the latter, left alone with the girl, tempts her all the more. He draws Antonia into a fiendish snare, speaking to her in her late mother's voice and words. Submitting to dreams of the stage and renown, Antonia renounces her promise to Hoffmann, sings in ecstasy and dies.

Act III
Venice, at the lavish palazzo of the courtesan Giulietta. Hoffmann hears the song of Giuletta and Nicklausse; it is a barcarolle ("Belle nuit, ô nuit d’amour" ("Beautiful night, oh night of love"). Giulietta is a perfidious beauty, stealing the souls of her lovers and presenting them to the evil sorcerer Dapertutto. One of the courtesan's admirers, Schlémil, has already lost his own shadow because of her. Now Dapertutto wishes to gain possession of Hoffmann's soul and promises Giulietta a diamond if she can obtain the poet's reflection ("Scintille diamant" ("Sparkle, diamond"). Hoffmann joins Giulietta's guests and sits down with them at the card table. The courtesan seduces the poet and, feigning to be in love, persuades Hoffmann to give her his mirror image, as if for a keepsake. Schlémil appears with the key to Giulietta's rooms. The –rivals conduct a duel, and Schlémil falls by Hoffmann's hand. The poet grasps the key, but only sees the deceitful woman sailing off on a gondola with her next lover, Pitichinaccio the dwarf. Only Nicklausse's assistance helps Hoffmann evade the police.

Epilogue
In the tavern, the students continue to drink and make merry. Stella arrives, but Hoffmann barely recognises her. The prima donna leaves the tavern on Lindorf's arm. Nicklausse appears as the muse once more and comforts the poet.

Turning one's own self into a theatrical character – such a metamorphosis would undoubtedly have appealed to the great romantic Ernst Theodor Wilhelm Amadeus Hoffmann. Had he lived to the age of seventy-five, he could have attended the Paris premiere of Michel Carré and Jules Barbier's play Les Contes fantastiques d'Hoffmann (1851) and heard his own self speaking in French from the stage. In the opera, composed another thirty years after the play, Hoffmann would also sing: in the first version as a baritone, and later as a tenor, the vocal range of all fervent operatic lovers. And how he sang! The role of Hoffmann is one of the most beautiful and demanding in the international operatic repertoire. The titular protagonist is at the core of the opera, he appears in each and every act and he is the narrator, in his inebriated state opening up his soul to his drinking companions. Within this soul, the prima donna Stella reigns supreme, adopting various guises: the costly doll Olympia, the unfulfilled performer Antonia and the predatory courtesan Giulietta. Offenbach, a brilliant melodist, succeeded in making them all irresistible in their own way. If the concept of "a hit" may be used with regard to opera, then this is how one may consider the most celebrated highlights of Les Contes d'Hoffmann: Olympia's staggeringly virtuoso couplets, Antonia and her mother's bel canto duet and, lastly, the opera's "smash hit" – a delightful Venetian barcarolle, sung by Giulietta and another mysterious character, Nicklausse, ossia the Muse. Hoffmann loves them all, and each time he experiences defeat. The finale of Les Contes d'Hoffmann always ends up being something of an intrigue, as there is no one way to resolve it – and theatres offer the most widely divergent possible endings. And yet Jacques Offenbach's key idea may nevertheless be summed up: the loneliness of the artist is not absolute; crushed and disappointed, he is still left with his most precious jewel – his faithful muse, his talent that gives him the strength to live and create. Khristina Batyushina