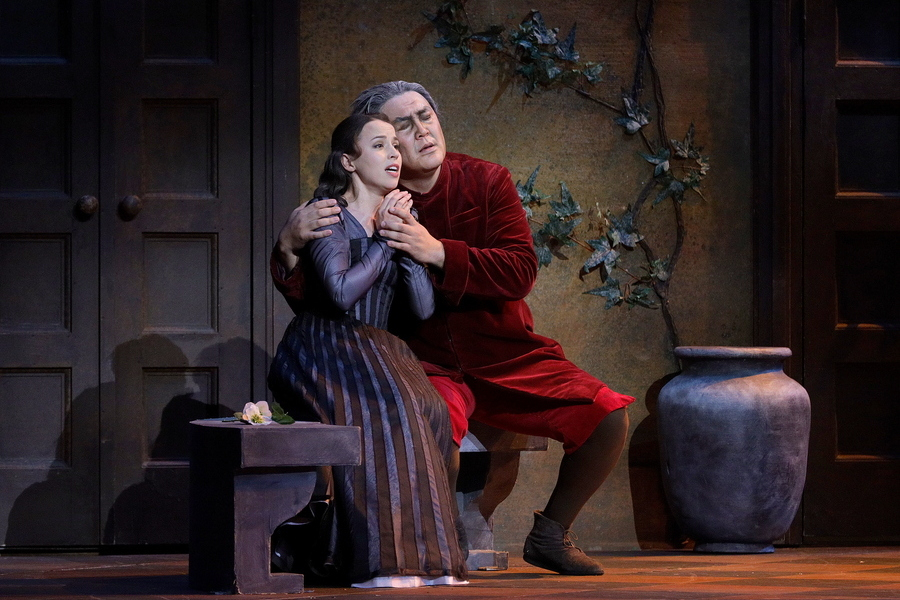 The action takes place in Mantua and its environs in the 16th century.

Act I
A ball is underway in a magnificent hall at the Duke's palace. The corrupt ruler boasts of his love conquests to the courtier Borsa: soon he will seduce the beautiful stranger whom he meets at church. At the ball, the Duke also begins to flatter the Countess Ceprano. His jester Rigoletto makes fun of the Countess' husband.
The courtiers plan to take revenge on the jester for his sharp tongue; one of them, Marullo, says that Rigoletto has set up home with a lover. Unexpectedly Count Monterone appears, having come to defend his daughter's tainted honour. But the hunchback's jokes shower no mercy on him. Monterone curses both the Duke and his servant.
On the way home, in a dark street Rigoletto meets Sparafucile, a hired assassin who offers him his services. Thoughts of the curse give the jester no peace. He thinks about his own contemptible position, and this makes his blood boil with even more hatred to the courtiers.
At home, Rigoletto greets his daughter, his only joy in life since his wife's death. They talk together companionably. Guarded from the world by the care and fear of her father, the young Gilda lives alone under the watchful eye of the servant Giovanna, together with whom she only leaves the house to go to church. As he departs, Rigoletto orders Giovanna to watch more carefully over the girl. The Duke observes them from his concealed position. He bribes the servant to keep her quiet. Calling himself Gualtier Maldè, a poor student, the Duke declares his love for Gilda. Their meeting is interrupted by a disturbance on the street and the Duke must flee. Left alone, the girl repeats the name of her unknown admirer.
Courtiers in disguise arrive at Rigoletto's house in order to abduct Gilda. On encountering the jester, the plotters convince him that they wish to abduct Count Ceprano's wife. Rigoletto falls for the bait and helps them abduct his own daughter. Gilda's cries are heard in the distance, and it is only then that he understands what has happened.

Act II
A hall in the palace. The Duke is perturbed: having returned to Gilda's home, he was unable to find her there. The courtiers then tell him about their nocturnal adventure and about kidnapping Rigoletto's lover. The Duke thus discovers that the girl is in the palace and hurries to her.
Rigoletto hides his grief behind his usual jester's mask. He knows that his daughter is in the palace and, after exploding in rage, he begs the courtiers to restore to him his only prized treasure. In tears, Gilda herself comes to her father and tells him about everything. Monterone is dragged passed towards the dungeon, grieving that his curses have no power. The hunchback swears revenge. Gilda begs for mercy, admitting that she loves the Duke.

Act III
A taverna on the shore of the river. Night. Rigoletto brings his daughter, who still loves the Duke, to see how he is amusing himself with another woman. The Duke is making love to Sparafucile's sister Maddalena. Gilda is left in despair. Rigoletto conseles her, promising a swift revenge. He sends his daughter to Verona, where they will meet later. Once Gilda has left, the jester gives Sparafucile an advance to kill the Duke - the rest will be paid when he receives the corpse.
A storm begins. The Duke falls asleep. Maddalena asks her brother to have mercy on him. Gilda, already prepared for the journey dressed as a man, returns and hears their conversation. Sparafucile agrees to kill the first man he meets before midnight instead of the Duke. Gilda understands that the time has come to act: the voice of love speaks louder than the voice of reason. She knocks at the door and falls under the blows of Sparafucile. The thunder diminishes. At midnight Rigoletto collects the sack with the body and is ready to throw it into the water. But in the night the Duke's singing can be heard. The hunchback tears open the sack and sees Gilda. As she dies, his daughter begs his forgiveness. Rigoletto falls over her body with the cry "La maledizione!"

Verdi's opera Rigoletto was written in 1850–1851 and was fated to be the most human and psychologically profound opera of its time. Its plot was taken from Victor Hugo's 1832 play Le Roi s'amuse, which had been banned by the French censor. The librettist Francesco Maria Piave reworked the drama, changing the characters: instead of King Francis I, whom it was impossible to depict on the stage due to the considerations of censorship, there emerged the Duke of Mantua, who bore the name of an actual ancient line that had, however, died out several centuries before, and instead of the jester Triboulet, a genuine historical person who served at the Court of King Francis, Rigoletto the hunchback was born (his name coming from the French rigoler – “to laugh”). Verdi and Piave stepped away from the canons of Romantic opera, in which good and wicked characters were typically clearly defined (albeit not without the possibility of their being transformed) and where in the finale a clear moral was to be drawn from their clashing together. Both the heroes and the villains were intended to be handsome, while any ugliness was to be enacted only by comic characters. Here, however, Verdi made the comic character into the hero, revealing his inner world to the audience, and, moreover, he rejected any unambiguous moral judgement on any of the characters' actions whatsoever, refusing to split them into the just and the guilty. All of the opera's characters rouse sympathy, each of them is complex, and it is possible to understand them all. The dissolute Duke is utterly charming and somewhat lacking in intelligence, though by no means evil. The hapless Rigoletto loves his daughter desperately, she being his one and only treasure and joy in life, though at Court he permits himself to poke cruel fun at the woes of others, including paternal woe (as a result of which he receives a father's curse). Gilda, Rigoletto's daughter and a beautiful young woman with a radiant and pure soul, transgresses her father's bidding, is denied his protection and is pulverised by the millstones of a bleak world, to living in which she is clearly ill-suited. Sparafucile the assassin is merciless, he creates an impression of something incredibly wicked, but this is neither more nor less than his work. He, too, is not devoid of the ability to manifest his humanity: in the opera we see that he loves his sister Maddalena.

The production at the Mariinsky Theatre makes use of large-scale sets in dark velvet tones, creating a sensation of immense space, be it the Duke's castle or the menacing countryside on a stormy night. Rather than interiors with abundant finely worked details we have before us large accent objects – the capital of a column, or free-standing candelabras taller than a man – and these create the space while not drawing our attention away from the characters' actions and their emotions. Denis Velikzhanin