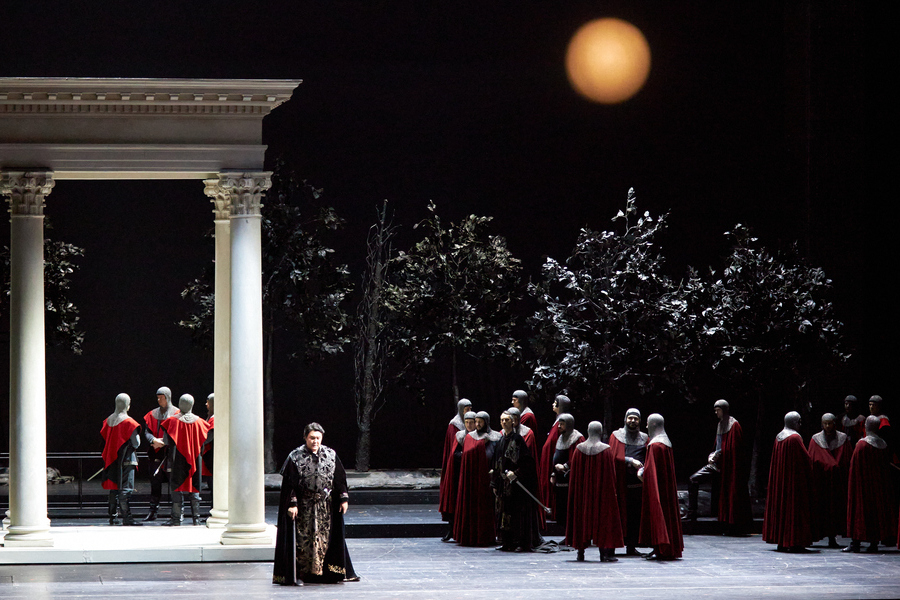 Act I  (The Duel)
The Aliaferia Palace. Ferrando, a confidant of the Count di Luna, tells the palace guard of tragic events that occurred many years ago. The old Count had two young sons. One morning a terrifying gypsy woman was found at the cradle of the youngest. The boy began to wither away – the witch placed a curse on him. She was caught and burned, but the gypsy’s daughter took revenge: she abducted the child and he has never been seen since. Where the witch was executed the burnt bones of a child were found.
The old Count did not live long after that. Not believing in the death of his youngest son, he made the eldest – who is the present day Count – swear never to stop looking for his missing brother. Every search, however, has been in vain.
To this day at midnight the ghost of the dead witch haunts the palace, taking on various forms...
Unexpectedly a bell rings in the distance – it is midnight. Gripped by superstitious terror, the guards flee.
A moonlit night in the palace garden. Leonora awaits the troubadour Manrico in delighted apprehension. She tells Ines of how she first met him at a competition of knights. Since then she has not seen the troubadour for a long time – war separated them. In vain Ines soothes Leonora – the latter has given her heart to Manrico forever. The Count di Luna appears. He rushes towards Leonora’s balcony, but the troubadour’s song makes him freeze. Leonora hurries to meet Manrico. A quarrel breaks out between the rivals. Leonora implores the Count to have mercy on Manrico but, filled with envy, he unsheathes his sword and prepares to fight.

Act II  (The Gypsy)
A gypsy camp in the hills near Biscay. Dawn. The gypsies set off for work singing songs. Only Azucena is sad. Left alone with Manrico, she tells how her mother was burned on the orders of the Count di Luna. Azucena, having abducted the Count’s son, then resolved to throw him into the same fire but, driven mad with grief, she made a terrible mistake – she burnt her own child.
Manrico is appalled at what he hears – does this mean he is not Azucena’s son?
The gypsy calms him, reminding him she loves him. Manrico must take revenge for her and show the Count di Luna no mercy as he did in their recent duel. The troubadour himself cannot explain his sudden surge of compassion: he was ready to finish off the prostrate count, but some mysterious voice stopped him. Now, however, he will be merciless. A messenger gives Manrico a letter from his friend Ruiz: Leonora, having received misleading news of Manrico’s death, has resolved to seek seclusion in a convent. In vain Azucena tries to restrain her son – he cannot live without Leonora.
A convent near Castellor. Believing the troubadour to be killed, the Count di Luna plans to abduct Leonora from the convent – now no-one will come between them. Leonora bids a fond farewell to Ines; she does not lament her fate: better the convent than life without Manrico. Together with the nuns she approaches the altar. Suddenly their path is barred by the Count di Luna and his retainers: instead of the convent, they will be married. It would appear that there is no salvation...

Act III (The Gypsy’s Son)
The camp of the Count di Luna. The soldiers are preparing to besiege the castle where Leonora and Manrico have taken refuge. The Count, tormented by jealousy, hopes to separate them once more. The soldiers bring in Azucena who has been captured as a spy. Ferrando recognises her to be the gypsy who once abducted the Count di Luna’s younger brother. Azucena calls on Manrico in despair. The Count’s malicious joy knows no limits: he will not only avenge his brother but will execute the mother of his worst enemy into the bargain.
Castellor. A shadow of alarm falls over the long-awaited marriage of Leonora and Manrico: the castle is surrounded by enemies and a bitter struggle lies ahead. The danger holds no fear for Manrico; Leonora’s love hardens his resolve. The anxious Ruiz relates that Azucena has fallen into the hands of the Count di Luna and that di Luna is threatening to have her burned alive. Manrico is filled with determination to save his mother; his call inspires the soldiers to seize the castle.

Act IV  (The Execution)
Before the prison tower of the Aliaferia Palace. The troubadour Manrico languishes in a tower, imprisoned. Leonora is prepared to save her beloved at any cost. In despair she begs the Count to free Manrico, but her entreaties only serve to increase his wrath and jealousy. At last, Leonora opts for the last remaining possibility: she swears she will become the Count’s wife, knowing that death will free her from the pledge she has made. While the Count gives his orders to the prison guard, Leonora swallows the poison hidden in her ring.
Joy fills the young woman’s soul – now Manrico is saved.
A prison cell in the Aliaferia Palace. In the gloomy cell Manrico and Azucena await death. Her troubles have broken down the gypsy woman’s spirit; she is tormented by terrible apparitions, and she sees a vision of the fire on which her own mother was burned alive.
Manrico’s tender care appeases her; falling asleep, she dreams of her native mountains and her former carefree life. Leonora enters.She has brought Manrico his freedom: the prison doors are open to him, but she cannot go with him. Manrico furiously upbraids his beloved – she has forgotten her vows. He needs no such freedom, purchased at such a price. It is only when the poison begins to take effect that Manrico realises Leonora’s heroic self-sacrifice. Coming in, the Count sees his hopes are futile. He orders Manrico be executed. Azucena awakes in terror and tries to stop the Count – but it is too late, the execution has been carried out. The gypsy woman then reveals her frightful secret to the Count: he has killed his own brother. Her mother is now avenged.

Pier Luigi Pizzi on his production of the opera:
“In my opinion, Il trovatore is a stunning example of Verdian melodrama, a point of reference for many other composers in the 19th century. The perfection of the opera’s musical form, its engaging plot, vivid choral scenes and the unusual beauty of the melodies allowed Verdi to convey with great power human passions including love, hate and jealousy as well as revenge and death.
Returning once again to this opera, so adored by many, and doing so at a mature age, I plan to focus on the psychology of the characters. I will also focus particularly on the intense dramatic story being told. The characters of the protagonists seem to me to create a strong impression.
Azucena is, of course, the lead female character: she treacherously fans the flames of the conflict between Manrico and the Conte di Luna, two brothers unaware of their blood ties, and awakens feelings of rivalry and mutual hatred between them.
I find that the Conte di Luna is another protagonist on whom Verdi bestowed the most noble and passionate arias. The insistence with which he seeks out his lost brother, the ardent passion he feels for Leonora, his fervent desire and his malice at unrequited feelings make the Conte di Luna a powerful dramatic character.
In comparison with him, Manrico, who has the privilege of performing the opera’s most famous aria, remains vulnerable and immature, young and inexperienced  – a mere pawn in the hands of the gypsy woman. Of Leonora it could be said that she is one of the most romantic characters in the history of opera. Two arias that Verdi assigned to this role  – Tacea la notte placida and D’amor sull ali rosee  – rouse the most incredibly tender thoughts for this courageous woman who resolves to sacrifice herself for the sake of love.
This opera stirs powerful emotions in me, and I would like to convey this noble feeling to the audience.”

Running time 2 hours 45 minutes
The performance has one interval