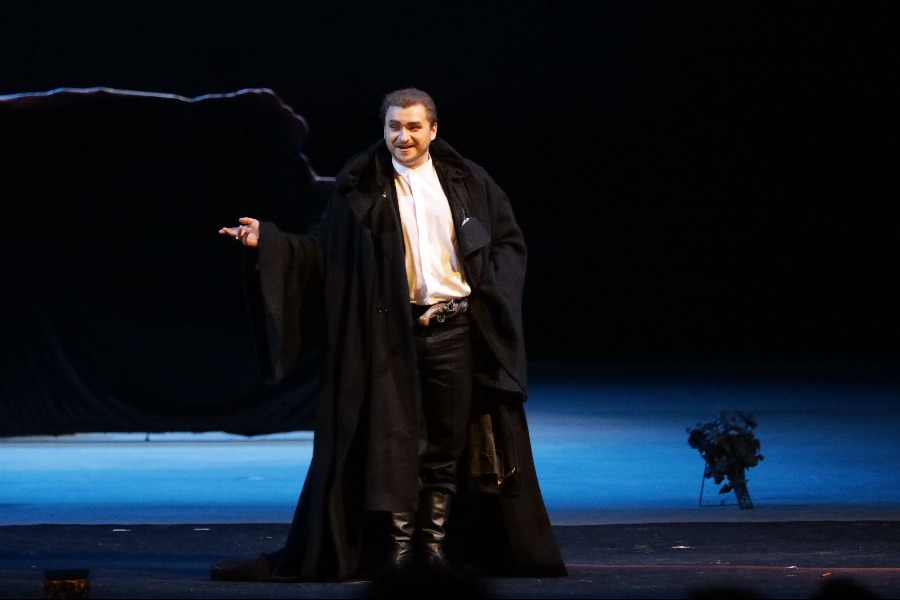 Act I
Leporello is waiting outside the Commendatore’s house for his master, Don Giovanni, who has slipped clandestinely into the bedroom of the Commendatore’s daughter, Donna Anna. Don Giovanni suddenly rushes out of the house, pursued by Donna Anna, who wants to know, no matter what, who her unexpected night-time visitor was. She unsuccessfully tries to tear off Don Giovanni’s mask. The Commendatore appears, having been woken up by the commotion, and challenges the uninvited guest to a duel. At first unwilling to accept the challenge, Don Giovanni all the same kills him and then escapes together with Leporello; Donna Anna and Don Ottavio, her fiancé who has appeared in time to help her, swear to take revenge on the unknown murderer.
Don Giovanni is daydreaming about further amorous adventures. In the faint light of dawn a beautiful stranger attracts his attention. As he approaches her he recognises Donna Elvira, his former love, whom he abandoned three days after their wedding. In an attempt to escape her tedious reproaches, he leaves Donna Elvira in the care of Leporello, who readily relates to her a list of his master’s amorous conquests.
Peasants are celebrating the wedding of Zerlina and Masetto. Zerlina immediately catches Don Giovanni’s eye. In an attempt to get her on her own, he orders Leporello to take all of those present to his castle. Zerlina’s bridegroom tries to resist but is forced to give in to Don Giovanni’s threats. Don Giovanni distracts Zerlina with tender words and promises. However, at the most inopportune moment, Donna Elvira appears, followed by Donna Anna and Don Ottavio. Don Giovanni declares Donna Elvira to be insane. Alone with Don Ottavio, Donna
Anna confesses that she recognised her seducer of the night in Don Giovanni. She appeals to her fiancé to seek revenge.
Leporello reports to Don Giovanni how he has dispatched everyone to the feast at the castle and how he managed to get rid of Donna Elvira. Zerlina tries to calm the furious Masetto. Don Giovanni finds he is unable to be alone with Zerlina and is thus forced to join in the festivities with the bride and groom. Donna Anna, Donna Elvira and Don Ottavio appear, their faces hidden by masks. On the orders of his master, Leporello invites the masked visitors to join in the feast, during which there are to be no social distinctions between those present. Don Giovanni invokes everyone to act with utter freedom. The appeal is readily taken up but each person interprets freedom in his own way. In the chaos of the ensuing celebratory tumult Don Giovanni draws Zerlina away from the hall. The party is suddenly interrupted by Zerlina’s screams for help. Don Giovanni, annoyed, blames his servant for what has happened. Don Ottavio, Donna Anna and Donna Elvira remove their masks and accuse the real villain. Don Giovanni is forced to flee.

Act II
Leporello wants to leave Don Giovanni´s service. However, the money which Don Giovanni offers him persuades him to change his mind. Even in moments of peril, the untiring libertine remains true to his ways. He thinks up the idea of seducing Donna Elvira´s maid. But in order to get to her, he has to distract her mistress, and so Don Giovanni and Leporello swap clothes. Donna Elvira takes Leporello for Don Giovanni. Not realising she is speaking to the servant and not the master, Donna Elvira forgives Don Giovanni for the hurt he has caused her. Don Giovanni meets some peasants who are looking for Zerlina´s seducer on Masetto´s command. Disguised as Leporello, he sends them off on a false trail. Left alone with Masetto, Don Giovanni cruelly beats up the simpleton and steals away. Zerlina arrives and tends to her bridegroom´s wounds and comforts him.
Leporello in vain tries to get away from Donna Elvira. Finding himself in a difficult situation, surrounded by pursuers who believe him to be Don Giovanni, he is forced into revealing his face. Donna Elvira is mortified to the bottom of her soul. Taking advantage of the general confusion, Leporello disappears. Don Ottavio is determined to hand over the Commendatore´s murderer for trial.
Donna Elvira, inextricably caught up in the fate of her unfaithful lover, begins to lose her reason.
Don Giovanni and Leporello, hiding from their pursuers, find themselves in the graveyard as night falls. Their discussion is unexpectedly interrupted by ominous comments from the statue of the Commendatore. Don Giovanni makes his servant invite the statue to dinner. Donna Anna finds a way of evading Don Ottavio´s advances. There is no longer any place for men in her heart.
At midnight, Don Giovanni has dinner served, and the Commendatore has been invited. Donna Elvira tries, for the last time, to appeal to Don Giovanni to lead a righteous life. However, he remains intransigent to the end. He fearlessly holds out his hand to the statue of the Commendatore, before which Leporello experiences insurmountable dread. Impenitent, Don Giovanni crashes down to Hell.
Donna Anna, Donna Elvira, Don Ottavio, Zerlina and Masetto arrive to deliver Don Giovanni for trial. Leporello announces the news that his master has plunged down to the underworld. Wishing to create a sensation, he describes in detail what he has not even seen because he was too scared to watch.

Il dissoluto punito, ossia il Don Giovanni is the most talented opera in a trilogy by Mozart set to libretti by Lorenzo Da Ponte. The history of its creation is surrounded by rumours and legends: it is said that the composition of the text was not achieved without the assistance of Casanova himself, that the overture was written on the night before the premiere and, according to one bon vivant tale in Da Ponte’s memoirs, composing the libretto was accompanied by either Tokaji or Marcimino wine – it is this wine that Don Giovanni asks to be served in the final scene. After eight months of such work the opera was presented at the Ständetheater (Estates Theatre) in Prague in October 1787, and since then it has never left the stage. Audiences are attracted not just by the witty story contained within, or the surprisingly lively music by Mozart and its brilliancy of inventiveness but also by the hero himself, with his powerful and dark charisma.

Don Giovanni, a Spanish grandee, is a passer-by, a glutton and a libertine who has no principles other than the ones he has declared for himself. He is a great deal cleverer and more cunning than his entourage and, in some sense, plays at being God, but – either by crossing a certain line or by some coincidence – he falls under the power of forces that are beyond his control. These have no obviously explicit effect on him, though from the moment of the murder of the Commendatore, Donna Anna’s father, which takes place at the very start of the opera, success eludes the hero. It wears away imperceptibly, like the fragrance of a perfume; of its former extent we are to learn from the aria of his manservant Leporello, which details a list of Don Giovanni’s conquests of beautiful women, “ladies of all classes, all types, and all ages” numbering a total of more than two thousand. In the wake of Donna Anna, not one of Don Giovanni’s seductions meets with success, though success does remain with him – its effect lies in the fact that the protagonist can easily extricate himself from any situation. Exchanging costumes with his servant, the masked ball, the deceit of an infuriated fiancé, flight from prosecutors – none of this leaves even the slightest trace of despair: quite the reverse, it is presented as the latest merry trick, and even when the statue of the Commendatore begins to speak in the graveyard where Don Giovanni and Leporello meet following their latest adventure this is not enough to make Don Giovanni downcast in spirit. He greets the unexpected arrival of the Commendatore for dinner insolently – and only at the final moment before death does he sense the fear and inevitability of punishment. The sextet which concludes the opera provides the necessary morality, in terms of artistic effect it cedes much to the scene with the Commendatore and even seems superfluous, but in the age of classicism it would have been unthinkable to leave an opera’s finale on such a menacing, almost funereal note.

Johannes Schaaf’s production is minimalist, executed in gloomy tones that create the background even in the lighter sections of the music, shading the influence of Fate. Large light spots, several textured items and elaborately worked costumes – all of this forms one of the best ways to free the opera of any lush historical trappings, creating together with the music a shared emotional backdrop of what is happening and focussing our attention on the characters’ interactions. Denis Velikzhanin

Age category 16+
00:00
Update Required To play the media you will need to either update your browser to a recent version or update your Flash plugin.