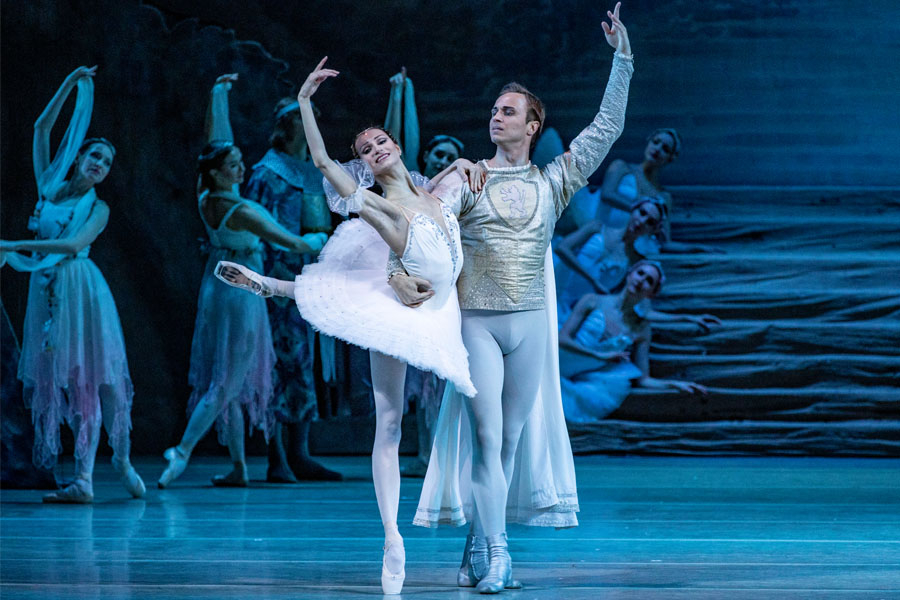 ballet by Marius Petipa set to music by Alexander Glazunov

Students of the Vaganova Ballet Academy

Music by Alexander Glazunov
Libretto by Lidia Pashkova and Marius Petipa based on a medieval legend
Choreography by Marius Petipa (1898), revised version by Konstantin Sergeyev (1948)
with choreographic fragments by Fyodor Lopukhov
Set and costume design by Simon Virsaladze

ACT I
Scene 1
Preparations for Raymonda’s birthday celebrations are underway in a grand medieval castle.
The seneschal announces the arrival of foreign nobles. René de Brienne from Hungary enters the hall together with other knights and armour-bearers. He asks for the fair Raymonda’s hand in marriage on his son’s behalf and presents her with a tapestry portrait depicting Jean de Brienne.
The seneschal barely manages to announce the arrival of other guests when Abderakhman, a Saracen sheikh, decisively enters the hall. He is unable to tear his eyes away from the beauty he sees and resolves to do anything in order to have her.
The party lasts late into the night. Alone and exhausted, Raymonda sits down in a chair and falls asleep...

Scene 2
(Raymonda’s Dream)
Raymonda dreams that the tapestry portrait comes to life; the handsome young knight draws her to himself and leads her into a castle.
Raymonda is enchanted with this beautiful world, one she has never seen before. The castle suddenly disappears, however, and in its place stands a desert tent...

Scene 3
(Raymonda’s Dream)
... The Saracen sheikh appears before Raymonda. He is gloomy and threatening and pursues her. Overcome, Raymonda falls, unconscious...

Scene 4
... Waking up, Raymonda can’t understand where she is. Her eyes catch the little Arabs presented to her by Abderakhman: they revive in her memory the image of the Saracen sheikh. A ray of sunlight touches the portrait of Jean de Brienne. So it was just a dream!

ACT II
Scene 5
The inner courtyard of the castle. Guests arrive from various countries to take part in the wedding festivities. Raymonda impatiently awaits the arrival of Jean de Brienne, but Abderakhman approaches her again and again with his passionate and ardent declarations of love. He promises her inestimable riches and supreme control of his lands, anything she desires! Having been refused, Abderakhman and his retinue attempt to abduct Raymonda, but his path is barred by Jean de Brienne. He challenges the sheikh to a duel and Abderakhman dies, slain by the knight’s sword. Raymonda welcomes her groom.

ACT III
Scene 6
Raymonda and Jean de Brienne are happy. The castle celebrates their marriage in an explosion of merriment.

Marius Petipa created Raymonda when he was in his eightieth year, and it was one of his late grand ballets. Its simple story, based on a medieval chivalrous legend, brought together everything that was the best of the best that Petipa had done in the course of his long career as a choreographer in Russia. Here there is a ballet and detective plot including dreams, kidnappings and joyous releases, a complex and varied ballerina role and a conflict between the male roles – the refined and classical Jean de Brienne and the passionate and pointedly typical oriental Abderakhman, the vast number of characters, meaning a similar number of dancers engaged in the ballet, the colourful character dances and, arguably, Petipa's main pride and glory – the fully-developed dance scenes of classical ensembles.
The composer, on the other hand, began his ballet career with Raymonda. The production was staged when Alexander Glazunov was in his thirty-third year. In this work the composer, new to the ballet genre, so ardently used his experience as a symphonist and maestro of vivid and colourful orchestral music that his subsequent dance works (The Trial of Damis and The Seasons) never cast a shadow over the glory of Raymonda, and it is this ballet that remains in history as perhaps Glazunov's most famous work.
Its conflict is based on the contrast of two different worlds: the serene and knightly noble idyll of Raymonda's medieval castle meets the Barbarian world of ungovernable passions embodied by Abderakhman and his suite. The choreographer resolved the musical contrast by juxtaposing the expressive nature of Abderakhman's gestures, the temperamental character dances of his suite and the classical dance of Raymonda's world. The role of Raymonda is one of the most demanding in the classical ballet repertoire. In this masterpiece by Marius Petipa, the ballerina performs five variations as well as incredibly beautiful adagios, the Pas d’action and the Grand pas. Alexander Glazunov did not stint in the musical richness of the female protagonist, accentuating each of her variations with different emotional colours. Choreographically, too, she reveals new sides to her character in the solo variations. In Act I Raymonda is light-heartedly youthful, in the scene The Dream her variation is songfully dreamy, in Act II she is ceremonially triumphant, and in Act III she alone is coquettish and different, performed to piano solo, meditative. Together this all creates the image of a heroine who embodies the many facets of womanhood. That's on the one hand. And, on the other, it is a role that showcases a virtuoso ballerina fully armed with universal technique and grace, beauty of line and absolute skill, a ballerina the likes of whom Marius Petipa sought throughout his creative career and an anthem for whom was to be his "swan song", Raymonda. Olga Makarova